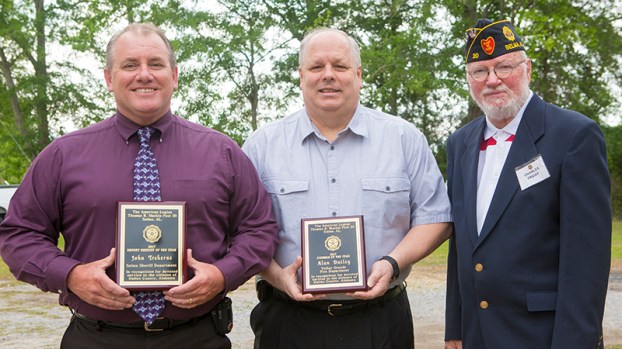 John Treherne, deputy sheriff of the year; Alan Dailey, fireman of the year; and Charles Friday Post Commander pose for a photo Thursday at the ceremony.

“It means everything [to me]. I’ve been doing this for 24 years and to be appreciated for what we do and not be criticized or ridiculed for what we do for the community is good,” Treherne said.

“It makes you feel good to be part of that appreciation that they have. American Legion is just an awesome group and to be recognized by them and affiliated with the other ones that have been recognized is just an honor. I just give thanks to American Legion and my fellow first responders, God and my family.”

Charles Friday, commander of the post said they have been giving out the awards for many years, and continue to do so because they see the need of recognizing the first responders that serve the community.

“It’s a thankless job that most of these men and women do and we wanted to make sure that they know that they’re appreciated. We appreciate what they do,” Friday said.

“We want to give them recognition for the things that they do and for what they do for our community.”

Friday said he has been in the position where he needed first responders himself, so he knows first hand what a privilege it is to have them in the community.

“I’ve had the misfortune of having them come to my house because we had a big fire and I lost my garage, but they came and they helped me put it out, so I’m very appreciative of them,” Friday said. “I’m thankful that we’re able to do this so that they know someone appreciates what they do.

Dailey, who has been volunteering for more than 40 years, said he appreciates American Legion for honoring the first responders for helping the community.

“It’s quite an honor. I’m thankful to the American Legion for recognizing the first responders in the area. We do what sometimes seems to be a thankless job,” Dailey said.

“I just like helping the community and helping people. Just knowing that you help people probably at their lowest point … that’s what keeps you going.”

An investigation into a former evidence technician with the Selma Police Department has uncovered a criminal operation allegedly responsible for... read more