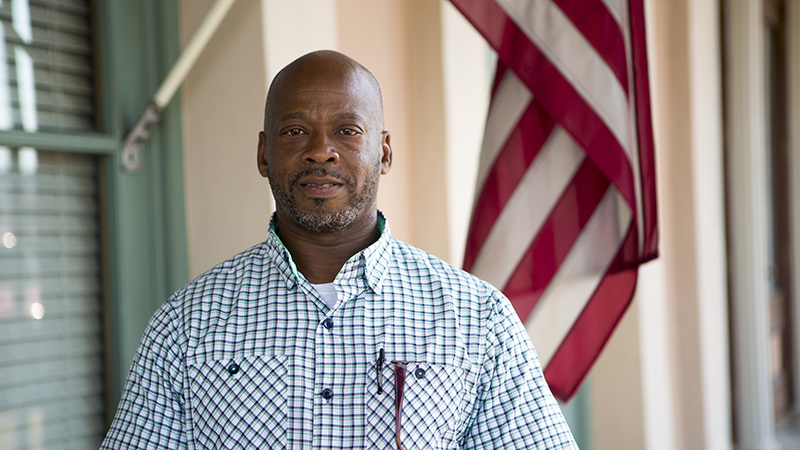 Earnest “Laray” Donaldson used to sit outside and watch the traffic go by on Highway 80 when he was about 10 years old. And many times, that meant watching police officers drive by at some pretty fast speeds as they went to calls.

“I would see the state troopers all the time go up and down 80 and I would always wonder … what it would be like to be behind the wheel of one of those cars that go fast,” Donaldson said. “I had no idea that it would actually come true.”

Donaldson is now an investigator with the Fourth Judicial Circuit Drug Task Force.

Donaldson began working as custodian at the Dallas County Courthouse and worked his way up.

He eventually began riding reserve with deputies with the Dallas County Sheriff’s Department, he said thanks to now Sheriff Harris Huffman and Chief Deputy Randy Pugh.

After riding reserve for a couple of years, he became a full time deputy with the department.

“I’ve just always been involved with helping someone and that has been my passion,” Donaldson said.

“I feel like the Lord has put me here for a purpose and in law enforcement to help people and that’s part of my calling.”

Donaldson has been in law enforcement for 18 years and has worked with the Drug Task Force for eight of those years. He said he loves Selma, and although he’s had the opportunity, he doesn’t plan on going anywhere else.

His goal now is to turn Selma around and cut down on the violence.

“Selma is a beautiful place. I love the country, even though I started out in the big city. But when we moved to Selma, we always had places we could play and back then you didn’t have to worry about the gun violence or all the violence that’s going,” Donaldson said.

“I would like to make Selma, with the help of the people here in Selma, where we can go back to where the kids can go back to playing in the back yard and in the front yard and not be worried about all the gun violence.”

Donaldson said he hopes to one day be the sheriff of Dallas County.

UPDATE: Department of Education issues statement on Mangum being…