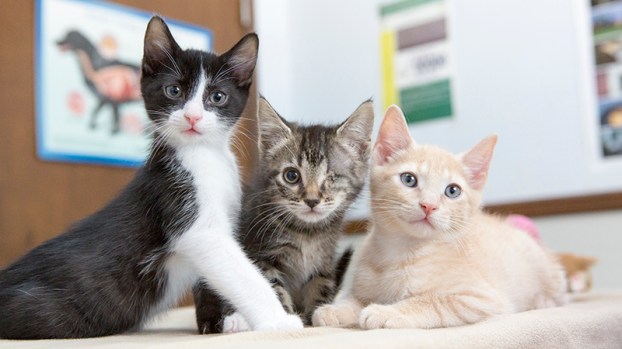 Kittens Baby Ruth, Elle and Nacho have been surrendered to the Selma Animal Hospital, where they have had to undergo treatment. Selma’s Purrrfect Pals is trying to raise money for the medical expenses for these kittens and other cats and kittens.

Jacque Johnson, a volunteer for Selma’s Purrrfect Pals and the Humane Society of Central Alabama, said the costs for the kittens is getting high, and the nonprofits are running out of money. To help with the financial side of things,

Jacque Johnson, a volunteer for Selma’s Purrrfect Pals and the Humane Society of Central Alabama, said the costs for the kittens is getting high, and the nonprofits are running out of money. To help with the financial side of things, Purrrfect Pals has started fundraising efforts to help pay for the medical needs of the kittens.

“It’s kitten season, and we are being inundated by a huge amount of kittens coming in. Selma’s Purrrfect Pals is not a rescue. We’re a group of volunteers that work through the Selma Animal Shelter, and we try to save as many of these precious creatures as we can,” Johnson said. “The volunteers have gotten together to try to raise money. We’ve made jewelry, we’ve hand painted mugs and wine glasses, we have made chocolate lollipops, and all of those things are for sale at Selma Animal Hospital.”

They have also created a basket to raffle off Friday. The winner of the basket will take home a $25 gift card to the Tally Ho Restaurant, three bottles of wine from Mark’s Mart, four bags of peanut and pecan brittle from Gantt’s Candies, a box of cheese straws from Joyce Rylee, two wine glasses, homemade bread, peppermint bath salts, chocolate hazelnut wafers, a chocolate rose and a candle.

Tickets for the raffle are $2 and three tickets for $5 and can be purchased at Selma Animal Hospital or through Johnson.

Another way to help the kittens is through fostering.

“We always need fosters. The big saying is fostering saves lives, and it really does,” Johnson said. “We look for foster homes that can take them in and give them some human contact and a little love and get them used to love and to people so that they will make good pets to someone.”

Johnson said they have started a foster to adopt program, where people can foster the kittens and then have them spayed and neutered for the adoption.

Currently they are looking for a foster for a mother cat and her kittens that were brought in Tuesday. They found the mother had been shot in the leg, and her leg had to be amputated.

Another couple of kittens, now named Baby Ruth and Elle, have had complications due to lack of care when they were born.

“Kittens need to be taken care of when they’re small. Elle lost her eye. Her eyes were matted shut for far too long so her eyeball burst,” Johnson said. “Baby Ruth was dumped at the shelter still nursing and she has had some kind of spinal damage, but she’s very healthy and happy and she doesn’t know she’s got any handicap.”

“We try to get as many kittens and cats adopted out and when we do, we make them fully vetted,” Johnson said. “All their shots are up to date, they have been spayed or neutered and they are microchipped.”

Davis Henry attended a banquet for the Brick Industry Association earlier this month having no idea he would be walking... read more