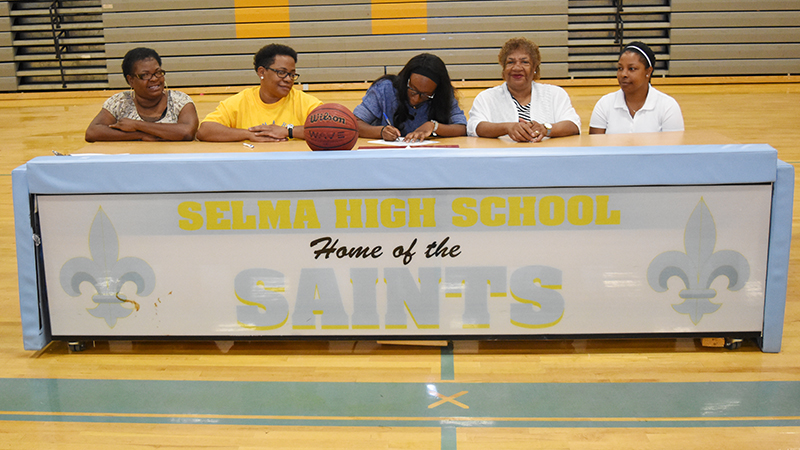 For the last four years, Selma High School’s Jacquetta Dailey has been one of the stars on the Saints’ basketball team. Her role changed on any given night, depending on what the team needed. At times, she carried the scoring load, but other nights she’d grab a big rebound or simply run the offense and let teammates score.

Selma won over 20 games every year and Dailey was a big part of that. On Monday, she signed with Coastal Alabama Community College in Bay Minette.

“I’ve always dreamed of signing with a college and playing ball and today my dream came true,” Dailey said. “It didn’t come easy. I had to put in hard work, dedication and prove myself. Now I’m going to a bigger league and I’ve got to prove myself all over again.”

Dailey visited Coastal a few weeks ago for a tryout. At the time, head coach Linda Pitts already had all the point guards she needed, but she liked Dailey’s game. One of the players Pitts expected to come to Coastal changed her mind and a spot opened for Dailey.

Pitts said she saw Dailey play at the 6A state tournament at Alabama State University.

“I lost a point guard that I thought I had and I realized what she could do. She wants to run the point and it was just kind of a good fit,” Pitts said.

Dailey said she expects to keep her winning ways going in college.

“I’m always about a winning tradition, and I always have been about one, especially with coach Harris,” she said. “You win some, you lose some, but I prefer a win over a loss.”

Dailey cheered and celebrated with longtime teammate Jamya Smith last week when she signed with Wallace Community College Selma. Now, the two will find themselves on different sides as they play through the Alabama Community College Conference season.

“It’ll be kind of funny at first playing against my teammate that I’ve been playing with all my life, but I mean it’s just a basketball game,” Dailey said. “It’s just life. It’s going to happen.”