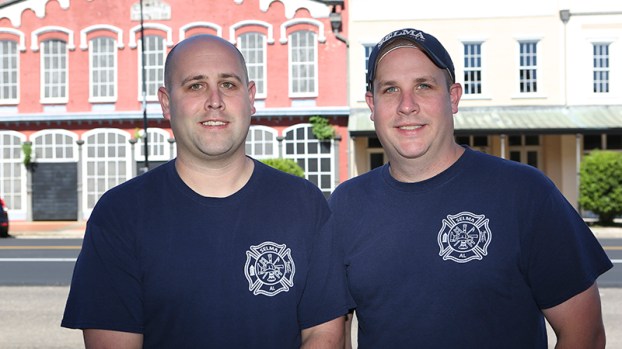 Will and Walter Dailey are brothers and both work for the Selma Fire Department. Their father is Dallas County Coroner Alan Dailey.

Brothers Will and Walter Dailey grew up in a family of first responders and medical professionals.

Their dad, Alan Dailey, is the current Dallas County coroner and serves as a volunteer fireman. Their mom, Cindy Dailey, works in safety and served as a nurse.

So it’s no surprise that the two of them followed in their parents footsteps and serve as firemen for the Selma Fire Department.

“My dad always worked for the ambulance service, and we always went so we got interested in it,” Will said.

Will is a captain for the department and serves as an assistant training officer. He graduated from the University of West Alabama and worked as a live-in firefighter.

“When I went to college, we lived at the fire station and we worked and they trained us,” Will said. “I got a chance to move home and get a step up so I did.”

Will has worked with the department since 2004, and said he loves it and it gives him the opportunity to help others.

Walter was recently promoted to lieutenant and started with the department in 2007. He graduated from Trenholm State Community College before beginning his career with the Selma Fire Department.

Unlike Will, Walter didn’t know at a young age that he wanted to be a fireman. But after an incident when he was 17 years old, he realized that is exactly what he was meant to do.

“I never really had any desire to be in it until one day I was picking my little brother up from Morgan Academy and I saw a kid go down and have a seizure, and I hopped out [to help] because nobody else was doing anything,” Walter said. “Ever since then, I wanted to be an EMT, I wanted to do the fire service.”

Both brothers volunteer at Valley Grande and the Selma and Dallas County Fire Rescue Squad and are deputy coroners. Will has a 5-year-old daughter, Jordan, and Walter will be getting married to Lauren Stockman on Saturday. But they both agree that the men they serve with are like family too.

“You’re with your second family at the station,” Will said. “The guys there, I spend a third of my life with them. They’re just like family. We’re very close.”

Being firemen, they get called out to situations where people are usually having one of the worst days of their lives, but they try to look at the positive and do all they can to help the citizens.

“You’re seeing people on the worst day of their life and you’re there to fix it,” Walter said. “They look at you for answers. If there’s a house on fire, you have to put it out, if there’s a wreck and they’re stuck, you’ve got to get them out.”

Big Bird, Elmo, Mickey Mouse, The Cat in the Hat and other cartoon characters welcomed over 600 second graders to... read more