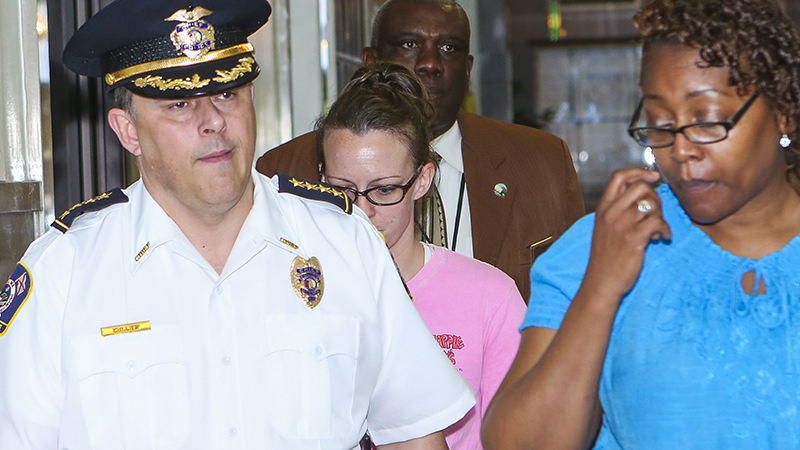 Adrianne Michelle Canterbury, 34, was arrested for allegedly stealing guns, including one used in an April homicide, and jewelry from the evidence vault at the Selma Police Department. (Alaina Denean Deshazo | Times-Journal)

An evidence technician with the Selma Police Department is behind bars after an investigation revealed she allegedly stole guns, including one used in an April homicide, and jewelry from the department’s evidence vault.

Adrianne Michelle Canterbury, 34, was fired Tuesday by Selma Police Chief Spencer Collier and arrested on theft charges, an ethics violation for using her office for personal gain and tampering with evidence.

The department launched internal affairs and criminal investigations simultaneously on Canterbury after a Dallas County school reported her son was in possession of 37 fake gold necklaces in early April. Canterbury was placed on leave while it was investigated.

The department did an inventory check of the evidence vault, which was only accessible to Canterbury, another evidence technician and a police officer that is over the vault, and discovered three handguns were also missing.

“She has cooperated, but nonetheless, we’re not going to treat any of our officers or any of our employees any different than we are the public,” Collier said. “You’re never happy when something like this happens … but it also demonstrates we are also willing to police our own. This is an administration that’s not going to tolerate any type of corruption.”

According to Collier, one of the guns was used in an April 14 case the Dallas County Sheriff’s Department investigated where a 19-year-old allegedly accidentally shot and killed his 19-year-old friend.

Ratravious Sanders was charged with the murder of Rufus Williams. According to Captain Mike Granthum with the sheriff’s department, four teenagers were riding in a car in the Sardis area. Sanders, who was sitting in the back-passenger seat, tried to shoot the gun out the window, but it jammed. Granthum said as he brought the gun back in and tried to figure out why it jammed, it went off, shooting Williams, who was sitting in the front seat.

“We located the gun that we believed was involved in the shooting … so we did an ATF trace on that gun,” Granthum said. “The gun comes back, and during the investigation we learn that that gun was supposed to be in Selma Police Department custody.”

Grathum said they notified the Selma Police Department of the finding, and department confirmed the gun was supposed to be in their possession.

Collier said Canterbury admitted to trading that gun for electronic equipment, so she could be facing additional charges related to the murder case.

“Any loss of life is unacceptable, but the thought of the weapon coming out of our evidence vault is just something that goes beyond unacceptable,” Collier said. “She’s a new employee, but nonetheless common sense along with policy and criminal law would and should dictate that you can’t take items out of an evidence vault.”

Collier said he believes this is an isolated incident, and that the department’s policy and procedures for the evidence vault are adequate.

Canterbury was not an arresting officer. Her duty was to collect evidence at crime scenes, such as collecting shell casings, doing blood swabs and taking photos of the scene.

Collier said the department will continue to check the inventory of the evidence vault.

Two of the handguns were recovered after a search warrant was executed on April 28 at her Valley Grande home, and the third is in possession of the sheriff’s department, which is still investigating the April 14 shooting.

Dallas County District Attorney Michael Jackson commented Tuesday afternoon on whether he thought the evidence vault’s compromise might hurt the department in any future cases.

“Given my discussion with the police department about what all she did, no, I doubt it,” Jackson said. “She didn’t handle any drug cases is what they told me, and the cases she had anything to do with there was other corroborating evidence on the case.”

Collier said another employee with the department was recently fired for mishandling receipts, but there are no criminal charges.