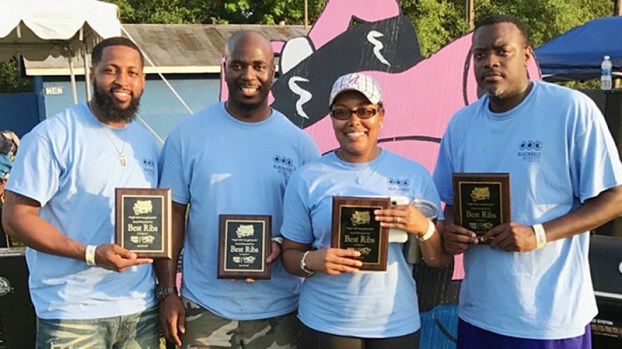 Most people know Tommy Tisdale as a basketball coach, educator or athletic director, but apparently, the man can cook a little too.

Tisdale and his Backyard Barbecue team won the Rock ‘n’ Ribs cook-off Saturday at Lion’s Fair Park. He and his wife Latonia, Cedric Brown and Torrance Beard were the chefs behind the best ribs Saturday, but he isn’t giving away the details.

Apparently, the winning recipe was a mix of love and a special “soul sauce,” which earned its nickname at the competition. The rest of the winning combination will have to remain a secret.

“I love my ribs and if you don’t love your ribs they aren’t going to come out right,” Tisdale said before giving the real reason why he won’t give the rest of the world any pointers. “If I tell you the secret to good ribs, then you are going to be winning rib competitions around here every day.”

Tisdale said he loves to cook for his family and friends, but he’d never entered a competition before this weekend. His wife celebrated her birthday by taking part and Brown and Beard are longtime friends who also know a thing or two about cooking.

“We actually formed a good team,” Tisdale said. “My wife gave us the female flavor, she did the decorations. She did her cowgirl baked beans that a lot of people raved about. I was on the smoker with the ribs and we actually had three different flavor wings. Coach Brown was on the wings and Coach Beard was on the wings and we just had a great time.”

Tisdale said the team went into the competition with the idea of having fun. As their ribs came off the grill, they started to get more serious, believing they might actually have a shot to win.

“We had a blast but it went from being really, really fun to [thinking] we might have a chance,” he said.

Tisdale said their ribs were among the last off the grill during Saturday’s competition because he wanted to make sure they were just right.

“I definitely wouldn’t miss it again, unless there’s a schedule conflict,” Tisdale said. “If I’m free, Backyard Barbecue will definitely defend its title.”

The Black Belt Community Foundation awarded $80,000 in grants supporting the arts in a ceremony Saturday morning at the Selma-Dallas... read more