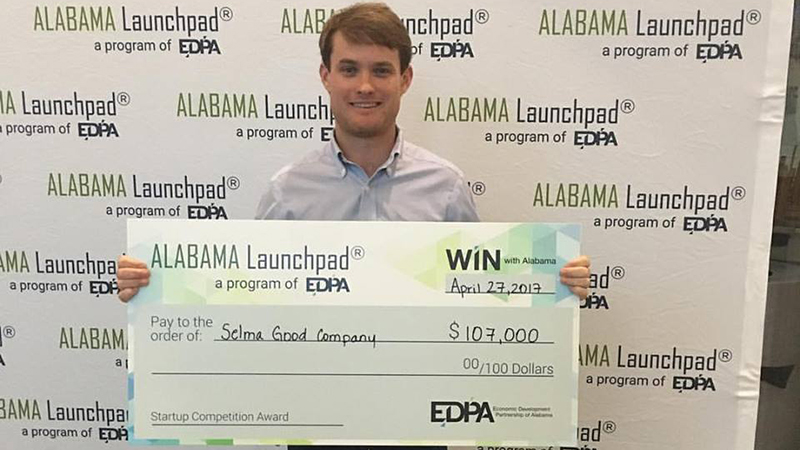 Robert Armstrong holds a check for $107,000 that was awarded to the Selma Good Company in the Alabama Launchpad Startup Competition. Armstrong will use the money to launch a new flavor of G Mommas Cookies.

Robert Armstrong, founder of G Mommas Cookies, has been in the running for a cash pool of up to $250,000 for the last few months, and all the hard work and patience has finally paid off.

G Mommas was awarded $107,000 in the Alabama Launchpad Startup Competition on Thursday.

“I just have to pinch myself because it doesn’t even feel real,” Armstrong said. “I was really just blown away. I was fighting tears for sure.”

Armstrong said the shot in the arm couldn’t have come at a better time for his company.

“It’s coming at a very important time in my business. We picked up some new retailers, and we’ve got to get the product moving in those stores,” he said. “I want to be successful and be a good steward of the money they gave me and execute all my plans.”

Armstrong said his first order of business after getting back from the competition is working on the development of a new flavor of cookie –– salted caramel.

“We’re going to push hard at getting a new cookie flavor,” Armstrong said. “As soon as I won … I’m already thinking about what I’m going to do first. I’m ready to get in there and start executing on this now. I’m super pumped to get started.”

During the competition, five businesses had to give a pitch to the judges on their company and how they would use the money if they won.

Armstrong said he was nervous going into the contest, and the anxiety built up because he was the last to go. But after he was finished, he felt good about his presentation.

“It was pretty nerve racking. I was nervous the whole day,” he said.

Armstrong said he started the business because of his grandmother, Anice Morris Armstrong, who made his favorite chocolate chip cookie growing up.

From there it took off, and G Mommas is now in more than 1,000 retailers nationwide, and Armstrong has plans to expand that number even more.

“The other teams are awesome, and it was fun being part of the journey and meeting some of the people that put it on,” Armstrong said. “It was a tough pick for the judges because I know all five companies are great.”

“I’m really blown away,” he said. “I’m just really excited, and I’m really honored to have been given the most out of anybody that has ever gotten it. The majority of the winners are from bigger cities … and it’s pretty cool that a company from Selma in rural Black Belt Alabama won the state contest.”