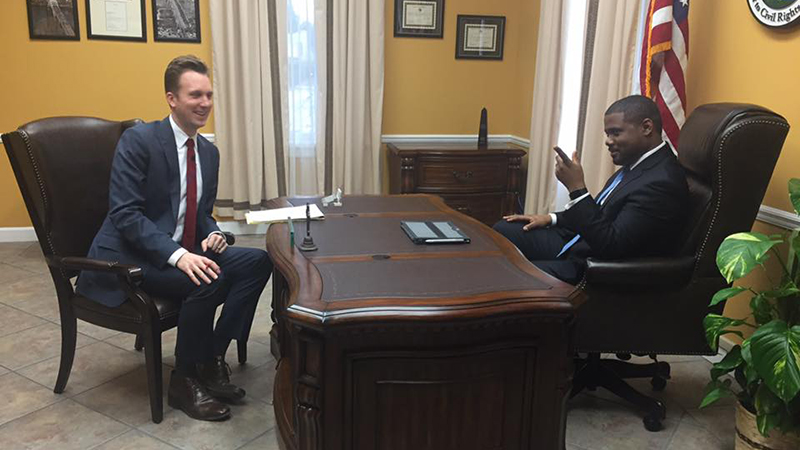 The city of Selma was the focus of a segment of Comedy Central’s The Daily Show Wednesday night, when it featured a piece on the city’s civil rights and Civil War history.

Mayor Darrio Melton along with Bridge Crossing Jubilee organizers Sen. Hank Sanders and Faya Rose Toure were interviewed for the piece, which was done by the show’s Jordan Klepper.

When Melton got the phone call asking to be a part of the show, he almost couldn’t believe it.

“When they first called us we thought it was somebody joking saying this is the Daily Show, and sure enough, it was them,” Melton said, adding it was filmed during Jubilee weekend.

This week was declared “Alabama Week” for the Daily Show because of a New York Times article that pointed out the show’s lack of popularity in Alabama.

His piece, titled “We Shall Overcome This Rebel Yell,” starts with a montage of clips of Klepper’s trip to Selma.

“Here at the Daily Show we know the south is a hot mess of conflicting identities. Take for example Selma, Alabama, where in 1965 African Americans were beaten by police on the Edmund Pettus Bridge, a turning point in the Civil Rights Movement commemorated each year,” Klepper said in the piece as it dives right into a series of clips from this year’s Bridge Crossing Jubilee.

It then cuts to clips of reenactors dressed in Civil War garb with Klepper talking about Selma also commemorating that part of its history.

“This year a young, progressive African American mayor took a stand against the Confederates,” Klepper said in the segment. “So you stopped the Confederate soldiers?”

Melton points out to Klepper that he also asked Bridge Crossing Jubilee organizers to pay for city services, as well as all other events.

“That’s dicey territory,” Klepper told Melton in the interview. “It feels like the police should probably work for free on the Selma anniversary. Just spit balling here.”

The piece then cuts to an interview with Sanders and Toure, who in the past have protested about the Battle of Selma reenactment but this year showed some support for the battle after it was canceled due to the change in city policy.

“I was not for them trying to close down the Battle of Selma,” Sanders said in his interview with Klepper.

The segment put humor in the idea of seeing organizers of civil rights and Civil War commemorative events standing together because it isn’t something outsiders would expect to see in a small Alabama town.

“I guess it’s part of that beloved community that Dr. King talked about,” Melton told Klepper. “That when the lion can lay down with the sheep … the sheep don’t have to fear being destroyed by the lion.”

“I had learned a lesson here. Alabama was an upside-down place where lions laid with sheep and civil rights marchers supported Confederates. I for one found their tolerance intolerable,” Klepper joked as his piece came to an end.

“Alabama may have these painful, conflicting histories, but the people there aren’t choosing to sweep them under the rug. They live with them side by side trying to learn from their past rather than bury it,” Klepper said of what he learned while filming the piece. “In a way, it’s the story of America.”

While some may think the segment shed a negative light on Selma, Melton said he feels differently.

“It was great exposure, I think, for our city, and that’s why I had no problem with being a part of that, to give our city some more national attention and make more people interested in Selma’s story,” Melton said Thursday.

“It’s unfortunate that people take that and say it’s a bad light on the city, but really I think it wasn’t bad. I think it just put some humor in what so many people caused a lot of attention about.”

Melton joked about becoming an overnight celebrity with his friends who tuned in for the show.

“I became a superstar with my classmates overnight. Everybody wanted my autograph overnight, but it was a very humbling thing to see,” he said. “I was just happy to be able to do that on behalf of the city.”