Chestnut sworn in at State House 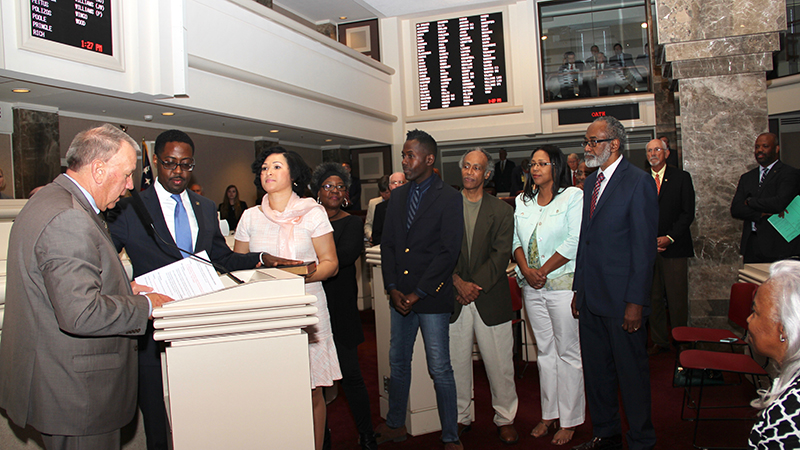 Chestnut was sworn in by Speaker of the House Mac McCutcheon with his family by his side.

“It’s one of those things where you’re finally there, so it was rewarding,” Chestnut said Tuesday afternoon. “All the hard work we’ve been putting in to get to that point, and to finally see it materialize, that was a good thing.”

Chestnut said it was a proud moment for his family, who watched him take his oath of office.

“I’ll put it this way. A couple of family members said they almost had tears to come down their eyes, so I know they had to be proud,” he said.

Chestnut said he has had a welcoming reception to the House of Representatives and is excited to get to work.

“It couldn’t be better. I’ve had so many members to come to me,” Chestnut said. “Several, several members came over and introduced themselves, spoke to me and told me they liked my speech and that they really look forward to working with me.”

Chestnut said he was also invited to join a committee that is in the process of being formed.

“Discussions are already starting on how to improve our area,” he said.

Although he couldn’t vote Tuesday because results haven’t been completely certified, he was able to observe and get a feel for being a state representative.

“They don’t have my machine plugged up to vote yet, but I was more or less kind of watching people, talking to people,” he said.

Chestnut received 2,788 votes in Dallas County, while Gorden only received 151 in the special general election.

District 67, which includes Dallas County and a portion of Perry County, has been without a state representative since Darrio Melton vacated the seat after winning the mayoral election in Selma in October and taking office in November.

Chestnut hoped he could be in office sooner, after winning the special primary election in January, but Gorden’s qualification as an independent candidate put the district without a representative for even longer.

The legislative session started in February, so Chestnut will be getting a late start, but he is prepared to do the job.

“I feel like we probably fell back a few months behind as a result of it,” Chestnut said. “But out of all of it you have to look at the silver lining in it, and I think the silver lining in it is it has allowed me to pick up some additional momentum, and with that momentum and with folks that I’m going to be working with who know that all of the people of my district support me, I think that makes a difference.”

Chestnut said he was told there are some provisional ballots that still need to be counted before the results are completely certified before he can officially vote.