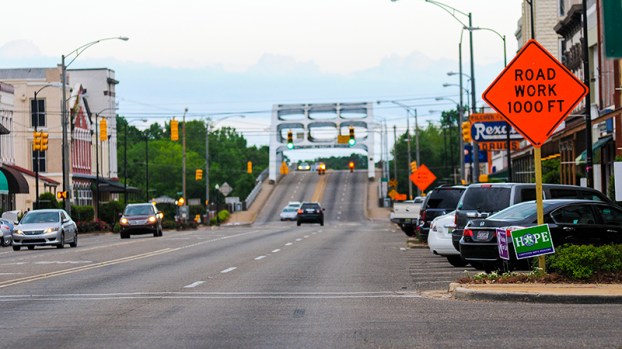 Broad Street will soon be repaved from the Edmund Pettus Bridge to Highland Avenue.

Signs have popped up along Broad Street in the last week warning drivers of an almost two-mile repaving project that starts Monday.

The project, which entails planning, resurfacing and traffic striping, will stretch from the Edmund Pettus Bridge to the intersection of Highland Avenue and Broad Street.

Planing is the process of removing part of the worn-out surface of the road to prepare it for resurfacing and to keep from raising the level of the road each time it is repaved.

The project is funded by the Alabama Department of Transportation (ALDOT). According to the original proposal from ALDOT, the length of the project is 1.797 miles. The contract was awarded to Asphalt Contractors, a company out of Montgomery, for $1.2 million.

According to a release from ALDOT, work will begin Monday and is expected to take a total of 50 working days, which means the project will be completed sometime this summer. Depending on weather, the project should take around two months to complete.

The project was supposed to begin last fall, but according to Brantley Kirk, a public information officer for ALDOT, it was delayed due to utility work on the city’s part. Weather also played a role in the delay.

Kirk also warned that some parking may be closed during the process, so drivers are urged to use parking that is available on side streets. Parking spaces will be striped after the milling process.

According to Kirk, lane closures will be from 6 p.m. until 6 a.m. Sunday through Thursday while work is going on.

Kirk said in a previous Times-Journal report that work will be done during nighttime hours to reduce interruptions in traffic and business along Broad Street. Drivers can also expect a reduced speed limit through construction zones.

Before the first round of the Alabama Independent School Association baseball playoffs, Morgan Academy held a throwback baseball practice where... read more