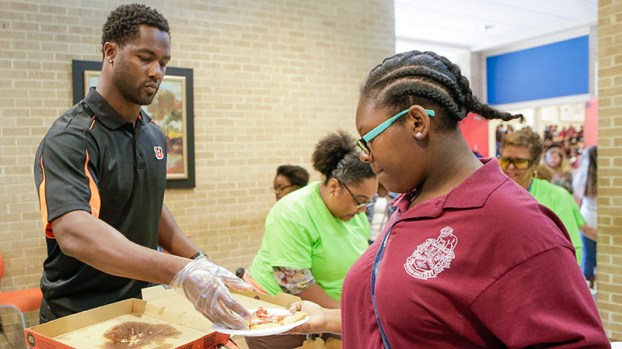 Hundreds of eighth graders around the county had the opportunity to get a head start on finding the best career path for themselves during the MJ93 Foundation’s Career Readiness Day at Wallace Community College Selma Friday.

Michael Johnson, Dallas County native and NFL defensive end for the Cincinnati Bengals, said it was important to him to give the children from where he grew up the chance to see what’s available to them and get them on the path to success.

“A lot of time kids are going to respond to what’s presented to them, so why not introduce them to different career paths that they can start thinking about now,” Johnson said. “I think it’s important to get kids exposure to different things.”

Johnson said he knows the students have a while before they have to make the decision on what to do in their lives, but he hopes that hearing from different people in the workforce will help them along the way.

“I know they’re not going to go out and get a job tomorrow, but they can put in their head … something they may be interested in,” he said. “I just think it’s important to get them information as early as possible so they can have it in their minds and be thinking about it.”

Since graduating from Dallas County High School in 2005, Johnson has made a point to come back to where he’s from and help out as much as he can.

“This is where I’m from. I get asked to do a lot of different stuff … all over the country and all over the world, but I have just always felt like if everybody takes care of their own back yard, it would make a tremendous difference,” Johnson said.

“In my mind, I’m like this is where I’m from, and this is what I would have appreciated being available to me when I was coming up here.”

Clifford Hunter of the Alabama Career Center was there Friday talking to the kids as they went from table to table asking questions and checking out the different businesses.

“This is positive for the community, but more so for the children. The earlier they are exposed to activities such as this, the better for them,” Hunter said.

“We appreciate the MJ93 Foundation for giving back to the community and being a positive light for the children.”

International Paper, Alabama Career Center, Selma Fire Department, Care Ambulance, the Chamber of Commerce and many more organizations were there to talk to the students.

“I really enjoy seeing [the kids]. I’m constantly walking up to them trying to encourage them to ask as many questions as possible, learn as much, take it serious and communicate with each other,” Johnson said. “I just hope that whatever they want to get out of it, they get out of it.”

Johnson said he challenges the parents to keep the momentum of the fair going.

“Parents, encourage your kid to be the best in whatever they do and just always stay positive,” Johnson said.

“It’s so important for their confidence and just them believing in themselves.”

Darlene Rudolph, GEAR UP Alabama site facilitator for R.B. Hudson, brought a large group of kids to the career fair Friday and said she hopes it opens their eyes to more opportunities and helps them develop as better all-around students.

“Most of the time, when I talk to the eighth-graders, the only thing they’re thinking about is playing football and they think that they’re going straight to play pro football. They don’t think about the in between that you have to get an education and there’s things that you have to do to prepare yourself for this,” Rudolph said.

“By meeting Michael Johnson, it gives them an opportunity to know that there’s more that you have to plan.”

Many of the students will get the chance to see Johnson again Saturday as he and the MJ93 Foundation hosts the eighth annual Michael Johnson Football and Cheer Camp at Memorial Stadium.