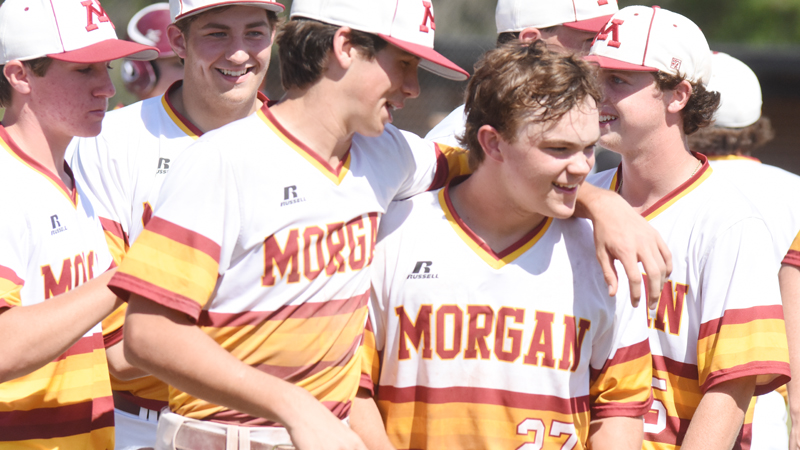 Early on, it looked like Friday wasn’t Morgan Academy’s day. The Senators were down 4-0 after only half an inning and squandered away several chances to tie and take the lead against Lakeside Academy in the opening game of the Alabama Independent School Association playoffs.

But, Morgan never gave up and in the end the breaks finally went the Senators way.

Morgan rallied to tie game one in the bottom of the seventh inning and had the bases loaded with Auburn commit Gunnar Henderson at the plate.

Henderson only got to see two pitches before Lakeside Academy pitcher Christian Beasley balked, which automatically advanced all three runners. Britton Adams scored on the play, giving Morgan one of the unlikeliest 8-7 comebacks you’ll ever seen.

With all the momentum on their side, the Senators went on to win game two 10-0. Morgan advances to play Bessemer Academy next week in the AISA playoffs.

It couldn’t have been a better ending to a day that started so poorly for Morgan.

In game one, Lakeside scored four runs in the first inning off of Morgan pitcher Brayton Brown, but Brown was unfazed. He led off Morgan’s first at-bat with a home run over the left field fence, pulling the Senators within 4-1.

“I think it energized the dugout and kept Brayton in the game,” Thacker said. “That was big for us.”

Lakeside scored one run in each of the second and third innings to take a 6-1 lead, but the Senators battled back.

In the third, Brown and Henderson scored on Lakeside errors to bring Morgan within three. Bishop Price flew out to left field, but hit the ball deep enough for Dione Allen to score to make it 6-4.

In the fourth, Morgan pulled within one on a Peyton Egbert single that scored Phillip Peake. Lakeside answered with a run in the fifth on a wild pitch by Morgan’s Sawyer Hopkins, who pitched three and a third innings of one run baseball.

Sam Plummer’s double to right field scored Price in the sixth, leaving Morgan one short of tying the game. The Senators had two chances to tie the game in that inning but Beasley forced Hopkins and Green to pop out to end the inning, leaving Morgan three outs from being down 1-0 in the best of three series.

But when they needed it the most, the Senators came up big. Price walked to start the inning and Adams reached on an error. Joe Estes laid down a perfect bunt to score Price, finally allowing Morgan to tie the game.

Lakeside walked Brown, but still had to face Henderson. On the second pitch of the at-bat, Beasley was called for a balk and the Senators won the game.

Morgan kept the hitting going in game two and now gets to advance to the second round of the playoffs for the second straight year. Henderson held Lakeside to only one hit in game two.

The Senators will play Bessemer on Thursday.