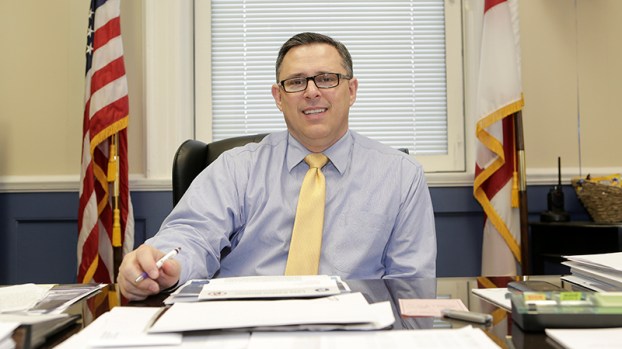 Over a year ago, Spencer Collier felt the wrath of now former Gov. Robert Bentley when he was fired as Secretary of Law Enforcement.

Now, a week after Bentley resigned and pleaded guilty to campaign violations, Collier said he is right where he wants to be as Selma’s police chief.

Collier said he has also reassured some Selma residents that have called wondering if he would be headed back to ALEA where his old position is now open after Stan Stabler, who took Collier’s place, stepped down last week.

Collier said he has no intention of leaving Selma and is enjoying the opportunity to help rebuild the department.

“Someone asked me the day after the swearing-in and I think they meant this as a criticism, ‘A lot of people are saying this is a step down for you,’ and I said no, it’s not,” Collier said. “It’s the perfect combination of being an administrator and being a chief, but also being a police officer. I’m catching calls, I’m backing up officers, I’m doing witness interviews. I didn’t get that opportunity at ALEA.”

When Bentley resigned as governor after he pleaded guilty to misdemeanor campaign violations last week, Collier said he felt vindicated.

But he didn’t take joy in it. He didn’t even watch Bentley’s resignation speech.

“I just simply chose not to watch that and take joy in something that was bad,” Collier said. “There’s been a few times where I’ve come close to feeling sorry for him, but then I think back to when he didn’t feel sorry for me and my family when they just concocted the wildest allegations that you can ever imagine.”

Bentley fired Collier from ALEA on March 22, 2016. Bentley alleged a “misuse of state funds” by the then Secretary of Law Enforcement. More than six months later Collier’s name was cleared when the Alabama Attorney General’s Office issued a statement on the investigation.

The Attorney General’s Office said “no witness provided credible evidence of criminal ‘misuse of state funds.’” The office also stated “no witness established a credible basis for the initiation of a criminal inquiry in the first place.”

“I knew that I did not do anything wrong,” Collier said.

Prior to Bentley firing Collier, the two had a long-standing relationship that started when they were elected to the Alabama House of Representatives in 2002.

“We were very close,” Collier said. “We just hit it off in the Republican Caucus and started eating lunch together. We voted in a very similar fashion. I think we ideologically saw things the same. A lot of times that draws people together, and it did.”

Collier said it was a confusing feeling when Bentley fired him and accused him of wrongdoing.

“A lot of it was confusion. I knew that I had not done anything wrong,” he said. “There was a strong bond there, a strong relationship, but he made a decision that it really wasn’t worth much and very easily set it aside.”

Collier said he expected Bentley to resign all along, but he thought it would come much sooner.

“I expected it. I did not expect it to take a year,” Collier said. “From a law enforcement perspective, it was pretty obvious … but so many agencies were involved. I don’t know if that sped it up or hampered it.”

“I try not to take joy in anybody’s misery, and he’s obviously at a point that’s pretty low in his life, but it’s not a situation where he was not forewarned by multiple people, and he made a conscious decision.”