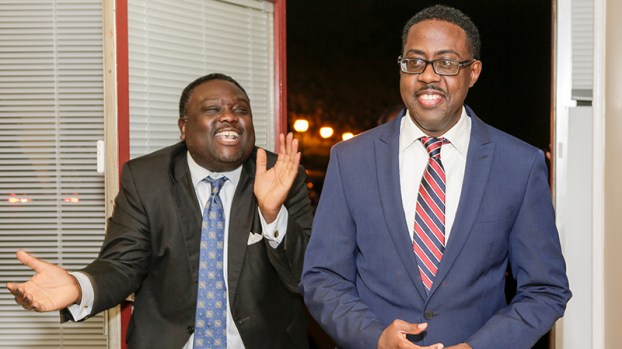 Billy Young announces Prince Chestnut as the winner of the election for the Alabama State House of Representatives in District 67 at his campaign headquarters Tuesday night.

Prince Chestnut hoped more people would have gone to the polls Tuesday to vote in the District 67 House of Representatives race, but he couldn’t have asked for a better result in the end.

Just like he did in January during the special primary election, Chestnut dominated Tuesday’s special general election with 94.8 percent of the vote, which makes him District 67’s state representative.

“I feel good about it,” Chestnut said after walking into his campaign headquarters greeted by supporters chanting his name.

“It seemed a little anticlimactic given we really believed we won the first go around, but it’s a good feeling because when I looked at the numbers I saw that people showed back up.”

There were 480 votes for straight democratic in Dallas County and two write-in votes.

“I believe that people came out and showed their support for me because I am Selma, I am Dallas County,” Chestnut said.

“I came up here. I went to the schools here. I ate, fought and learned with people here, learned from people here. So, I think that I’m quintessentially Dallas County, and I’m proof that you can come from here and you can succeed at a high level.”

Chestnut will serve for the rest of now Selma Mayor Darrio Melton’s term, which will expire in 2018. Chestnut was prepared to begin serving as representative in January when he won the primary, but Gorden qualified as an independent, forcing another election.

“When it happened, I just said okay, it’s back to the drawing board. I have to do the same thing again, and I have to learn from some of the things I didn’t do as well the first time,” Chestnut said.

Chestnut said he looks forward to getting sworn in and getting to work in Montgomery.

District 67 has been without a representative since February when the legislative session began.

“I’m really looking forward to get to work. I really thought that I would be working in February, so I have had an opportunity to meet with some of the legislators,” he said. “I feel comfortable with people. There’s no one I don’t feel comfortable with. I think I can work with everybody.”

“Unfortunately, it was a very light turnout. It’s less than 10 percent of the vote,” she said.

There were 31,098 registered voters in Dallas County for this election, and only 2,934 people voted.

Gorden got on the ballot after he submitted 671 signatures to the Alabama Secretary of State’s Office.

Attempts to reach Gorden for comment were not successful Tuesday night.

Over a year ago, Spencer Collier felt the wrath of now former Gov. Robert Bentley when he was fired as... read more