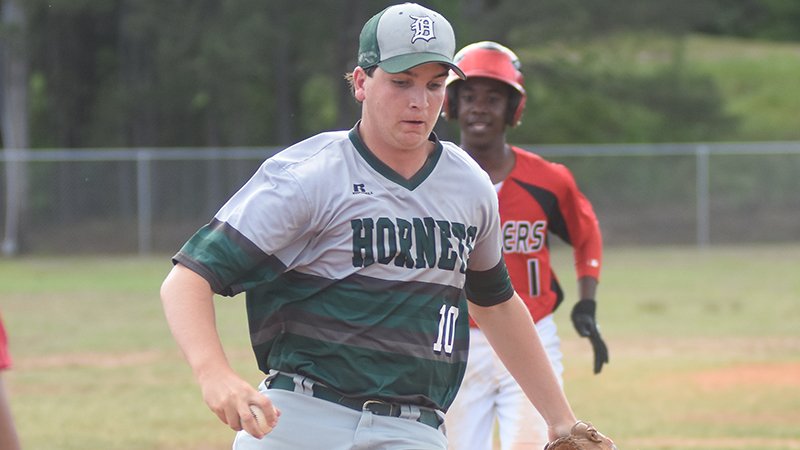 PLANTERSVILLE — Before the start of the fourth inning of Monday night’s game, Dallas County baseball coach Willie Moore looked at Hunter Skinner to give him a few words of encouragement.

Skinner was leading off the next inning and the Hornets were clinging to a one run lead.

“Your job is to find a way to get on base. If you get on, we’ll score four runs in this inning,” Moore said.

Skinner walked to begin the inning, but Moore was wrong. The Hornets didn’t stop at four runs. Dallas County went on to score five times in the inning, taking a large 8-2 lead. In the end, Dallas County still needed some insurance runs against a pesky Greensboro that wouldn’t go away, but the fourth inning was the turning point in a 15-8 win.

Denson started the game at pitcher and threw six strikeouts in four innings. Lester threw two innings and had three strikeouts before being relieved by Andre Smith. Daniels had a RBI single and Jones had three hits.

“Today was about them. I could tell they were a little emotional but when you are dealing with senior day you worry about if the kids are going to be able to contain their emotion and be focused and play,” Moore said. “We stranded a lot of runners today, but I was proud that we were able to scratch together some runs after getting down two. It showed a lot of moxie on our behalf to be able to come back and do that.”

After the game, the Hornets (21-4) made sure to recognize one other person participating in one of his last home games. Skinner and Paul Daniels dumped a cooler of water on Moore in the middle of the infield. Moore is retiring from coaching after this season, so Tuesday’s game against Keith will be his final time coaching a Hornets’ team at home.

Of course, the Hornets are mainly focused on trying to get better for Friday’s playoff series at Charles Henderson.

Dallas County has improved majorly over the last week in batting. After striking out 16 times and managing only one hit versus Demopolis last week, the Hornets had 17 hits Monday.

“We applied for punishment if we struck out,” Moore said. “We decided to have consequences for striking out with runners on base. It works because we’ve had two strikeouts in two games.”

The Hornets overcame an early 2-0 deficit with a triple by Lester in the top of the third. The Hornets took the lead for good on an Octavious Palmer sacrifice fly.

In the fourth, Skinner scored of a hit by Cade Whitaker to put the Hornets up 4-2. From there, the lead kept growing. Palmer ended the inning with a single to score Lester, making the score 8-2.

After giving up three runs in the fifth, Dallas County answered with five runs. One of the highlight was when Palmer, a freshman, doubled to score John Motley — one of three runs he brought in during the game.

The Hornets added two more runs in the sixth, thanks to a sacrifice bunt by Denson and a single by Smith, who pitched for one out in the seventh before leaving the game. Palmer entered to end the game, getting out of a jam where two Greensboro runners were on base to end the game.

The Hornets will host Keith on Tuesday at 4 p.m.