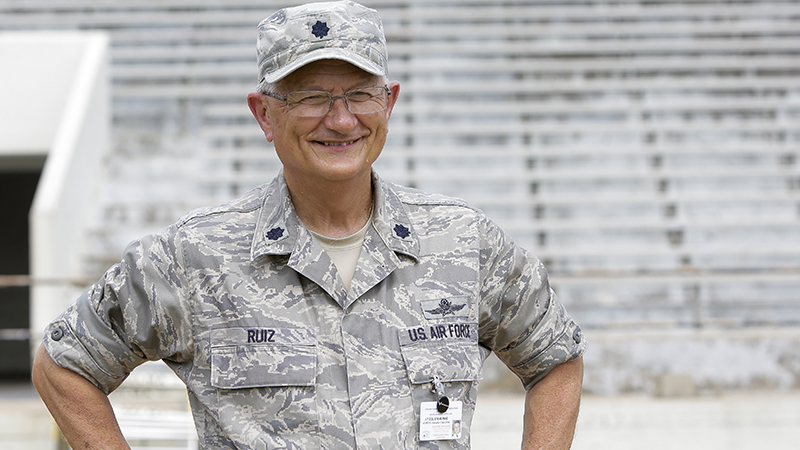 Lt. Col. Steve Ruiz has been teaching at Southside High School since 1997.

Lt. Col. Steve Ruiz served in the Air Force for 19 years before retiring and becoming the instructor of the Southside High School Air Force JROTC.

After retiring from active duty in 1996, Ruiz was presented with the opportunity to become the Air Force JROTC instructor at Southside and decided it would be a good way to continue wearing his uniform while also being a role model for the youth.

“One of the things I was hoping to do when I did retire was wear the uniform,” Ruiz said.

“One of the things I take a lot of pride in is wearing my uniform.”

Ruiz said he likes being able to help students and always enjoys when students come back to see him and have been successful.

“One of the things that I totally enjoy about the job is when I see children come back in some sort of role where they’ve been successful,” Ruiz said. “Teaching is a tremendous experience.”

Ruiz said he fondly remembers one cadet that came in as someone he thought would never be able to get into the military, but after graduating from high school that May, she came back in August in full Marine dress.

“To this day, it still chokes me up, because I was part of that success,” he said.

“It’s always great to see the kids come in as freshmen and see them go out as seniors [and succeed].”

Ruiz has been married to Debbie for 40 years, and they have three daughters, Amber, Kristi and Reagan.

Ruiz said behind his family, he has three things that mean the most to him –– teaching, music and running.

“It’s like I have three pillars,” Ruiz said. “The music is my spiritual being, the running is for my health and it clears my head and teaching is my fulfilling part where I’m helping these kids out.”

Ruiz has been the music director at Holy Family Catholic Community at Maxwell Air Force Base for more than 20 years, and has completed 55 full marathons.