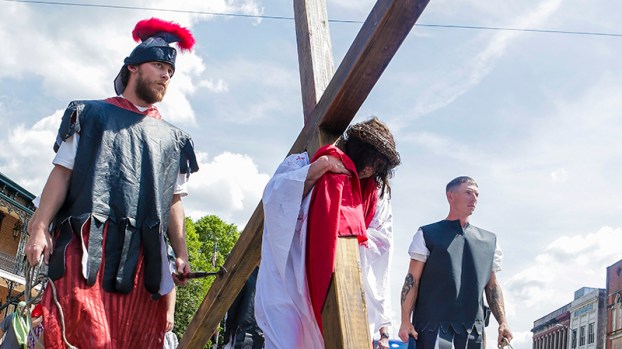 Standing on Broad Street during a Christmas parade more than 25 years ago, Rod Rochester said the Lord told him to reenact Jesus’ journey to the cross.

“Twenty-five years ago, the Lord told me standing down here to do it, and we’ve been doing it ever since,” Rochester said.

Led by Gateway Baptist Church, several churches in the area came together to put on the reenactment in hopes of telling the real meaning of Easter.

“It’s a combination of churches working together,” Rochester said. “We feel the need to do it because the Lord told us to do it.”

The reenactment started Thursday night with the Last Supper in front of Selma City Hall followed by Jesus being arrested in the garden.

On Friday, people depicting Roman soldiers brought out Jesus, portrayed by Troy Melton of Crosspoint Christian Church, and tied him to a pillar.

As a Roman soldier whipped Jesus, reenactors yelled at the soldiers to crucify him for claiming to be God and to let Barabbas, a “notorious prisoner” be released.

After Barabbas ran free, the Roman soldiers took Jesus to the cross where they put it on his back and told him to carry it.

Melton continued the part of Jesus and carried an actual wooden cross more than a mile down Dallas Avenue to Bloch Park while the crowd of people taunted him.

“The main thing is so the gospel can be seen and to remind people that Easter is about the resurrection of Jesus Christ. That’s where our hope is,” Rochester said.

“The only place that all of mankind will come together is in Christ Jesus.”

Rochester, who played a Roman soldier, said the reenactment is also a good way of bringing several churches together.

“We all serve the same Christ, so it’s just good when everyone is part of the brotherhood of Christians comes together and works together,” he said.

The reenactment will continue Sunday morning at 7 a.m. where they will finish the resurrection at Bloch Park.

People from all over the community came together Thursday night at Bloch Park for the first ever Selma Night of... read more