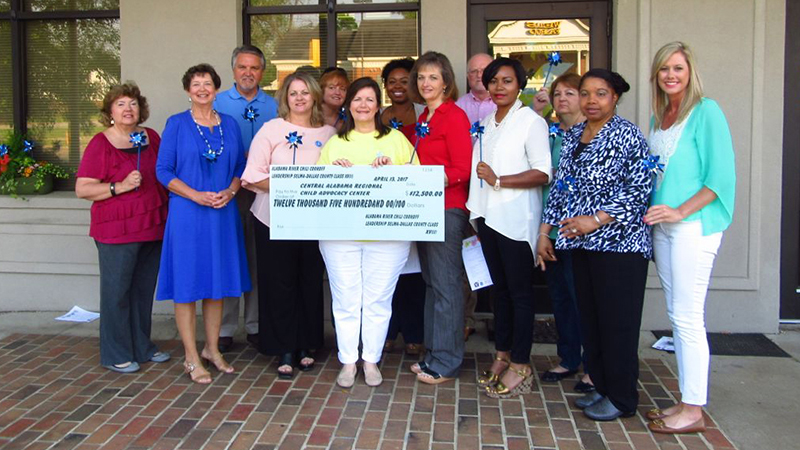 A $12,500 check was presented Thursday to the Central Alabama Regional Child Advocacy Center from this year’s Alabama River Chili Cookoff.

The money was raised during the sixth annual Alabama River Chili Cookoff in March.

“I was just amazed. I couldn’t believe it,” Cothran said. “The first time they did the chili cook-off six years ago I started hoping and wishing that we would be the recipients.”

Every year the leadership class gets together and nominates different organizations in the community they feel are doing a good job and are in need of the funds. A vote is taken and the charity with the most votes is that year’s recipient.

“It’s just overwhelming at how the Selma community continues to support this event every year,” said Leslie Free, a leadership member and organizer of the event. “Every year, it’s gotten bigger and better.”

Free said she and her classmates would not be able to pull the chili cookoff off every year without the help of the community.

“We could not do it without the support of our cooking teams and sponsors and the people that come out,” Free said. “We’re still surprised every year [at the amount of money raised].”

Cothran said Dallas County had 150 investigations into child abuse last year, and there were more than 800 investigations in the five counties that the center serves and with the money they will be able to help more and better serve the children.

“It is so important. [The money] will allow us to provide more services to the children and families in our region,” Cothran said. “We are so grateful to Leadership Class XVIII and so proud and honored that we were chosen.”

Cothran said a lot of grants require a percentage match, so she’s hoping this money will help them apply for and receive even more.

“I hope that we will be able to fund a whole new position, a new employee, when this gets combined with other grant money,” Cothran said.

The center also has plans to open a satellite office in Bibb County soon, a county that has a lot of requests for their services.

“The fact that the leadership class chose the Child Advocacy Center to be the beneficiary, is not only a great honor, but it’s such an endorsement and says so much that they recognize what we do as important,” Cothran said.

“The fact that the check presentation was in the middle of Child Abuse Prevention month makes it even better.”

The chili cookoff has donated more than $56,000 over the last six years.

“My favorite thing about the cookoff is that it brings together such a wide variety of people,” Cothran said.

“It’s such a positive event that is so well supported by a cross section of the community … and I love that that’s the kind of event that we’re benefiting from.”