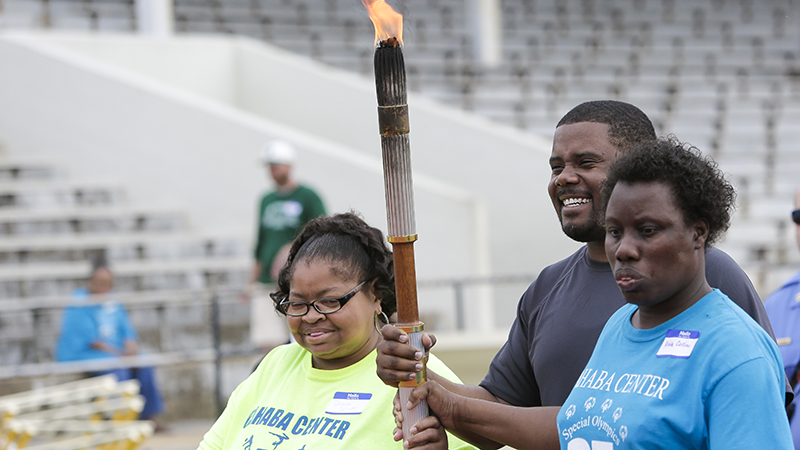 Memorial Stadium was full of athletes Wednesday morning as they all competed in the 38th annual Cahaba Center Special Olympics.

The day started off with a parade of athletes, where students from various high schools also joined in and Selma Mayor Darrio Melton carried the Special Olympics torch.

“We are so excited and proud to have the Special Olympics here in Selma,” Melton said as he addressed the crowd. “For all those that compete today, thank you for your courage to compete.”

Melton is no stranger to carrying the torch and talked about his experience last year doing so.

“Last year when I ran out the torch, Myron [Leverette] told me I better run faster,” Melton said laughing. “I appreciate that spirit.”

Athletes from the Cahaba Center and from the Montgomery Therapeutic Recreation Center competed in the events.

John Ward, an athlete for Cahaba Mental Health, came away with five ribbons, four second place and one first place.

Ward said he enjoys Special Olympics “a lot. I enjoy every bit of it.”

Running his is favorite event.

“It’s good to run against new people and old friends,” Ward said. “I just love it.”

Many schools and organizations came out to volunteer and help put on the events.

Lt. Col. Steve Ruiz, instructor of the Southside Air Force JROTC, said he has been bringing cadets out to the event for around 20 years, and believes it’s a good opportunity for them.

Lafon Barlow, executive director of Cahaba Center, said to those competing, it’s one of their favorite days of the year.

“As you can see from the grins, it’s the best day we have all year long,” Barlow said. “It’s a blessing to get to see them compete and to see them get to come out there and try, it’s an inspiration for all of us.”

Barlow said they also enjoy having the support from the local schools and agencies.

“It excites them to do good and they love having all the people come out and support them and cheer for them and clap for them. It does them a world of good all year long,” Barlow said.

“I think for them to be able to compete like other athletes do, is so good for their self-esteem.”