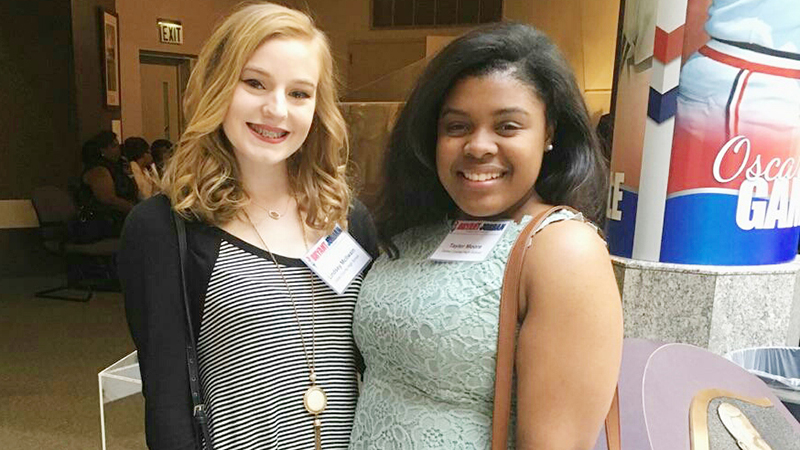 “I was really surprised that I got it, and especially two people from our school. That was really impressive to me,” Moore said. “I feel good because we put our school on the map.”

To qualify for the award, a coach has to nominate the students. According to the girls, more than 800 students were nominated, and 52 were chosen for each award, a total of 104 overall.

McIlwain and Moore both received $2,500 scholarships for winning Class 5A Region 3 in each category. Neither of the two won the overall award for each category, but the smiles on their faces said otherwise.

“We didn’t win [the overall award], but it was still an honor to be there and meet new people. It’s just a good feeling that we were two out of 104 that could have easily won it as well,” Moore said. “Anybody could have gotten nominated for it, and I just think it makes us look good and our county and school look good to be able to represent us like that.”

Moore’s parents, Willie and Linda Moore, who both teach and coach at Dallas County, are no strangers to having a child win their area. Moore said in 2012 her brother Justin also represented Dallas County at the banquet.

“I know my parents feel good because I’m the second child in the family that received it,” Moore said. “I just want to put our school on the map in a good way and to make our school look good and make people want to come here, play sports … and get awards like me and Lindsey did.”

Moore plans to major in nursing at Troy University.

McIlwain is the daughter of Pamela and the late Darrel McIlwain. McIlwain’s father passed away in January, but she knew how supportive he was of her and how much he wanted her to chase her dreams.

“I think he would be really proud,” McIlwain said of her father. “All I want to do is make him proud.”

McIlwain plans to attend South Alabama and get a degree in physical therapy and later get her doctorate in sports medicine and said the scholarship money will be a big help in achieving those dreams.

“It means a lot [to receive the scholarship money],” McIlwain said. “I didn’t realize how many people were nominated, and when I did, it made me feel really good about myself. My family was really proud.”

Amy Reeves, a counselor at the high school, said she was elated to find out that two students had made it to Birmingham for the banquet.

“For us to have two representatives from our school for this scholarship, that’s wonderful. I’m very, very proud,” Reeves said. “They both play sports, they’re honor roll students, they’re in the National Honor Society, Beta Club, FBLA … so they’re very involved in the school. I want our kids here to know that they’re just as smart, just as talented as all of these other schools.”