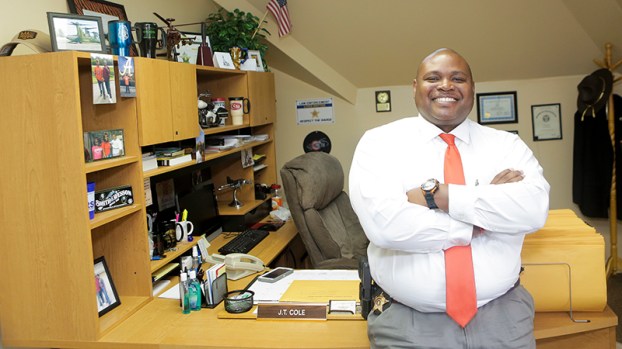 Investigator Sgt. Johnathan Cole with the Dallas County Sheriff’s Department has worked in law enforcement for 16 years and knows that every day on the job will be a different adventure.

“You never know what you’ll be facing one minute to the next,” Cole said. “I strap on my gun and badge every day with the Lord on my side because that’s who I turn to for my protection.”

Cole realized while in school at R. C. Hatch High School that he wanted to be in law enforcement.

“During a career day at R. C. Hatch, the troopers came in and one of the troopers asked me what did I want to do with myself. I thought that since I know that I can’t change society, that at least I could put myself in the position to make a positive impact on society one person at a time,” Cole said.

The trooper was Hugh McCall, who later retired as the director of public safety for the state of Alabama.

“He gave me everything I needed to start in law enforcement, and it was something that I felt that I could do, that I wanted to do,” Cole said.

“I wanted to be just like that officer that was standing there talking to me.”

After graduating from Liberty University in Virginia, Cole decided to reach out to the officer that had once inspired him.

“Three years later when I actually got in to law enforcement, I called him up and … amazingly to me, he actually remembered who I was,” Cole said. “That was something that always stuck with me because he didn’t forget me.”

Cole started out as a security guard in Indiana and eventually made his way to Dallas County, where he has served for almost 10 years.

“I plan to retire [in law enforcement]. It’s my livelihood. It’s in me now, and I look forward to it every single day and it’s what’s making me who I am,” Cole said. “I’m blessed and proud to be a part of it.”

But Cole said without his family, he wouldn’t be able to do the job that he loves.

“That’s the most important thing to me. My family is my backbone. My wife and kids, my in-laws, I owe a lot to them because they give me that support I need,” Cole said. “When I’m off, my downtime is to spend time with family.”

Andrew A. Sewell was known by many as “Coach Sewell” on the sidelines or “Bo Diddley” on the court, but... read more