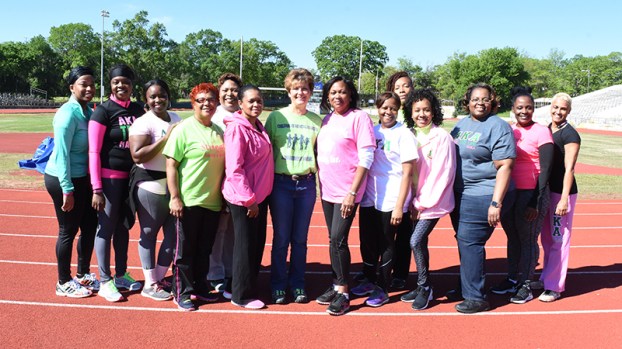 A one-mile walk was held Saturday morning at Memorial Stadium to raise awareness for mental health.

The walk was put together by the Zeta Eta Omega Chapter of Alpha Kappa Alpha Sorority, Inc. and the Cahaba Center for Mental Health. The event was called the AKA/NAMI — or National Alliance on Mental Illness — walk, and an estimated 50 sorority members participated.

“We are just raising awareness. We are walking for health and letting people know that mental illness is serious,” said Anne Williams, program director. “That’s what we are about… we believe in service to all mankind and one of the areas and one of our targets is to work with individuals who are mentally challenged.”

Several participants came from the Cahaba Center as well and participated in the walk.

The mental health community often goes underfunded statewide and organizers wanted to make sure they were doing their part to raise awareness. Farlow said suffering from a mental illness is just like getting cancer, although the two illnesses are looked at entirely different.

“Mental health affects everyone,” said Zeta Eta Omega Chapter president Elizabeth Rutledge. “We may not think it does, but we all have to play our part in fighting that disease, so our national organization Alpha Kappa Alpha stresses that we work and do as much as we can in our communities to fight the mental health disease that affects us all.”

Rutledge said in January Zeta Eta Omega fed the community at the Selma PAL Center and in February they focused on heart health awareness. They also clean up a portion of Highway 80.

In May, they will work on restoring a playground around Selma, although the location has not been determined. Last year, they painted the playground at Clark Elementary School and planted new flowers.