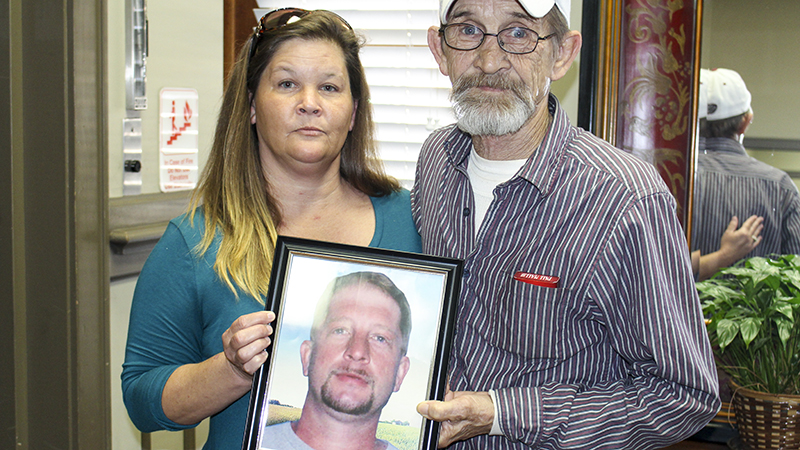 The family of Jimmy Wayne Griffin Jr., who was shot and killed two years ago Monday, are asking the public to come forward if they have any information on the unsolved homicide. Shown above are Griffin’s father Jimmy Griffin Sr. and sister Penny Griffin.

The family of a man who was found murdered in a burned out mobile home two years ago is still seeking answers in the unsolved homicide.

Jimmy Wayne Griffin Jr., 36, was found April 10 with a gunshot wound to his back after the fire had been distinguished at the mobile home on Karen Street.

Griffin’s family, including his father and sister, say they need closure in the case and for those who killed Griffin to be brought to justice.

Griffin’s sister, Penny Griffin, said she saw an article in The Selma Times-Journal on another unsolved murder — that of Taffine Berry — and decided it was time to bring her brother’s case back to light.

“Our family felt like we had to speak out. We will be praying for Taffine Berry’s family and all the other familys going through the same,” Griffin said. “No one should have to endure this kind of pain and heartache.”

Griffin said the family has had a difficult time getting updates on the case.

“I know that we have a lot of crime going on now. But what about the ones that are unsolved? It feels like they have been forgotten,” Griffin said.

Griffin said family members are told by investigators that the case is still under investigation and the district attorney’s office is still working the case.

She said an arrest wouldn’t bring her brother back but would give the family some sense of closure.
“The saddest part is that he will never see his sons grow up … All we want is closure and to know who and why this happened to him. If anyone knowns anything please come forward,” Griffin said.