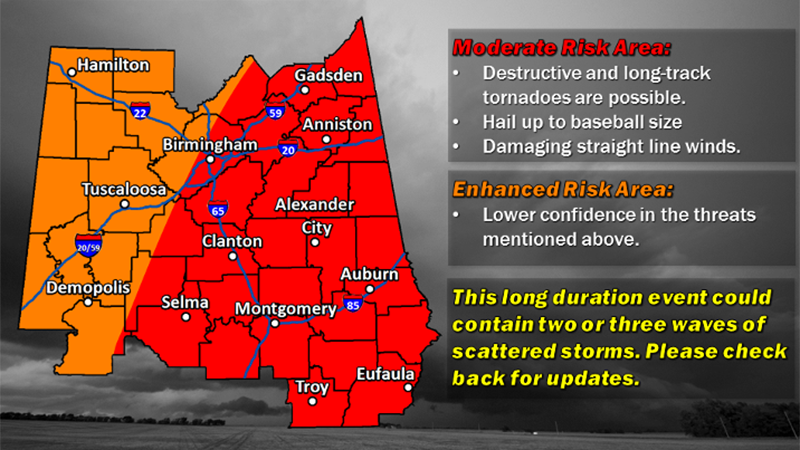 Dallas County is under a moderate risk for severe weather on Thursday. Long-track tornadoes, hail and straight line winds are all possible. --National Weather Service in Birmingham

The National Weather Service in Birmingham is warning people to be on their toes Wednesday, as a severe weather outbreak could take place in Central Alabama.

Dallas County has been placed under a moderate chance for severe weather, meaning the chance for destructive and long-track tornadoes are possible, as are hail up to baseball size and damaging straight line winds.

“There are going to be two separate waves that are coming in, with maybe a lull in the middle. It’s just kind of uncertain when that break is going to occur,” said meteorologist Nathan Owen with the National Weather Service in Birmingham. “The main threats we are looking at right now are large hail and some tornadoes and some of those tornadoes may be on the strong side.”

“The biggest question would be the morning stuff — how long it lasts and how much instability can build in for the second round,” Owen said. “That’s kind of the question mark and something, we really won’t know for sure until it starts playing out.”

The 12:34 p.m. forecast update on Wednesday moved the moderate risk area to the west, encompassing all of Dallas County. The moderate line goes up through portions of Bibb County and includes Birmingham, Anniston and Gadsden.

The western portion of Central Alabama is under an enhanced chance for severe storms, which means there’s lower confidence in tornadoes, hail and straight line winds, but that all are still possible.

Wednesday’s storms aren’t similar to the line that came through Monday. Wednesday’s showers are expected to pop up over Alabama, instead of moving in from the west.

“A lot of times we will get these systems that you see the line of thunderstorms over toward the Mississippi River and we follow them and we track them as they come through Mississippi into Alabama,” Owen said. “This one, that line is going to be developing right over Alabama.”

The National Weather Service is encouraging people to get their plan in place now, just in case severe weather impacts their area Wednesday.

“We’d like to remind everyone to use this time now before the storms occur to make your plan, go over your plan with your family for when severe weather is going to occur,” Owen said. “Check the batteries in your weather radio, make sure you have multiple ways of receiving watches and warnings and just go over that preparedness plan now so that you don’t have to think about it whenever the stuff is coming through.”

The YMCA of Selma-Dallas County posted on Facebook that the facility is closed until at least noon — “or until further notice.”

Visit www.selmatimesjournal.com and visit The Selma Times-Journal on Facebook for additional closings.

Storms cause closures, another system on its way