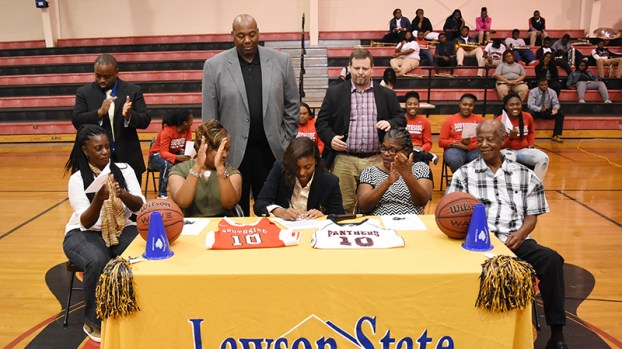 Southside senior Ki’Onah Page had to think about the question before she could determine the answer. When did she first want to play college basketball?

“Since I picked up a basketball,” Page said before reconsidering her answer. “Actually, since middle school.”

Either way, it’s been a long journey for Page, but it culminated Tuesday when she signed to play basketball at Lawson State Community College in Birmingham. Page averaged 14 points per game this season and 8 rebounds per game, according to coach Ed Dean.

The Panthers finished the season 12-12 but had more wins than they’d had the last two seasons combined.

Now, she’ll take her talent on to the next level.

“It’s the next step in life,” Page said. “I’ve got to become successful. That’s all. Books and sports — I’ve got to keep my head on straight.”

Page wants to study pre-occupational therapy because she’s always wanted to go into a nursing field.  She also had offers from Wallace Community College Selma and Southern Union, but Lawson won out because she liked the environment and wanted to live outside of Selma for college.

“I feel like that’s a great fit for me. I really didn’t want to stay in Selma,” Page said. “I wanted to try something different.”

Dean only coached Page for one year, but he said it was clear early on that she was a hard worker.

“They are getting somebody that works hard and gives everything she has,” Dean said.

Lawson State coach Aubrey Wiley said Page will be a great fit for the Cougars.

“She’s a great kid and she’s going to help my program out a lot,” Wiley said. “I’m really proud to have her as part of my program.”

Page is hoping that her success shows her classmates that they can do anything they want if they keep working hard.

“You can become whatever you want to be in life,” Page said. “Don’t let anyone tell you otherwise. Keep faith and don’t let nobody tell you that you can’t do something because you can.”