Storms cause closures, another system on its way 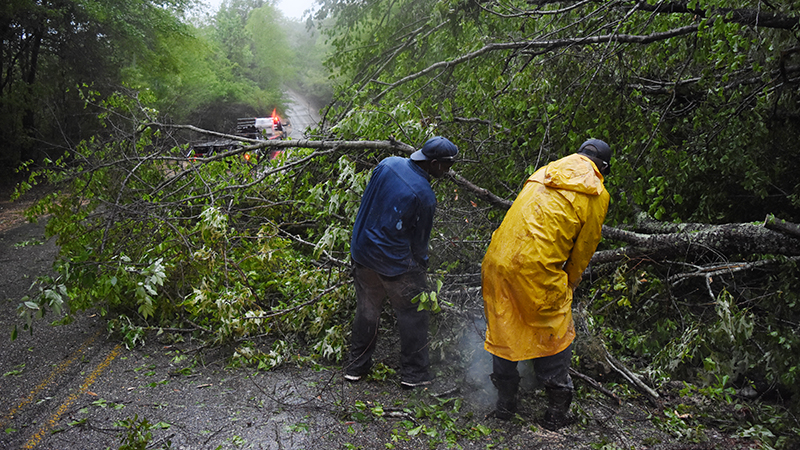 Workers try to clear a fallen tree from a section of Dallas County Road 7 Monday as more rain continues to fall. --Daniel Evans

One round of severe weather has passed for Central Alabama, but a second threat is on its way.

Monday’s line of storms resulted in school closures, but fortunately did not result in any major damage, at least locally. Trees fell across Dallas County Road 7, but crews were already working in the heavy rain Monday morning to move them out of the road.

“We did have some reports of some wind damage from Sumter County in the west to Barbour County in the east, mainly along and south of Highway 80,” said meteorologist John De Block, with the National Weather Service.

The Dallas County Emergency Management Agency said it had no reports of damage on Monday morning after the severe portion of the storm had passed through. The same storm system resulted in five deaths total in Louisiana and Mississippi, putting Alabama, Georgia and Florida on high alert going into the workweek.

The National Weather Service listed Dallas County under a moderate risk for severe storms going into Monday morning, the fourth highest rating on a scale that has five different designations.

Flooding and the sheer amount of rain ended up causing the biggest problem in many areas. Alabama Power reported that approximately 560 Selma customers were out of power Monday morning and 8,100 people in Central Alabama.

No tornado warnings were issued for Central Alabama on Monday, but there were several severe thunderstorm warnings, although none for Dallas County. De Block said some areas have reported three to four inches of rain. The Selma rainfall totals won’t be known until Tuesday.

“There was some heavy rain that came through with this system. It might’ve been a temporary inconvenience but it should be a significant contribution to help us out get out of the drought situation a little bit,” De Block said.

The majority of Dallas County had already been removed from the drought designation — one of only nine of Alabama’s 67 counties that weren’t considered in a drought — but the rain figures to help the rest of the state. Parts of Jefferson County and Tuscaloosa County are in a group of eight counties that were still considered to be in a severe drought, according to the weather service.

Locally, the rain can’t hurt, but it also did its part to wreak havoc on school and athletics schedules.

All of Dallas County’s local high schools closed Monday, as did Concordia College Alabama. Wallace Community College Selma only held night classes, which started at 5 p.m., well after any threat of bad weather had already passed. Even City Hall was closed Monday and Monday with the Mayor, the first meeting in a series where Mayor Darrio Melton will talk to citizens in a public setting, was postponed until next week.

“Good Morning Selma! Due to inclement weather, City Hall will be closed today and Monday with the Mayor will be postponed until next week,” read a post on the City of Selma Mayor’s Office Facebook page. “Please stay safe and keep an eye on the weather!”

In the end, it looks as if Alabama caught a break. Now, the state will hope to do the same Wednesday, when more severe weather is expected to impact the area.

As of Monday afternoon, the National Weather Service in Birmingham listed all of Central Alabama under an enhanced risk for severe weather Wednesday.

The NWS also listed a note on its latest forecast for Wednesday, which said “there is a substantial uncertainty with the forecast, but this has the potential to become a serious situation.”

“We are going to be looking at a pretty ripe opportunity for severe weather, anywhere between 3 a.m. on Wednesday and 3 p.m.,” De Block said.

The line of storms Wednesday will have a different look than the one that came through the area on Monday.

“We aren’t really going to be seeing that line of activity. We are going to see more super cells or line segments where we have the capability to get some prolonged thunderstorms that produce gusty winds, some hail and perhaps tornadoes,” De Block said.

Tuesday is expected to be mostly sunny and warm. Other than Wednesday, the rest of the week should also be fairly clear.

“With this system, once it passes, it’s really going to give us some fresh, cool, dry air and at the end of the week we’ll actually see some temperatures going below normal as we get into Thursday and Friday and into the beginning of the weekend,” De Block said.