Teacher of the Week: Denson wanted to coach early 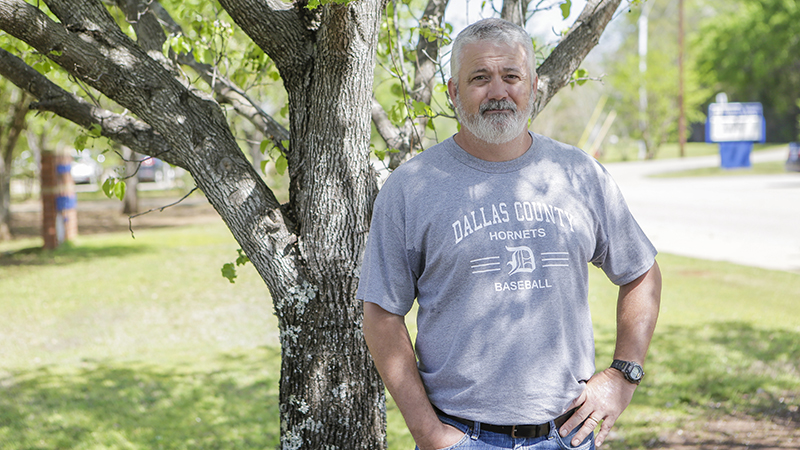 Gaylen Denson grew up in Dallas County playing baseball and football and at an early age knew he wanted to be a coach when he got older. To be a coach, he also had to be a teacher. But what he didn’t know, was that teaching would soon become the priority.

“I got into it to begin with for coaching. I wanted to get more into the coaching, and it ended up going the other way, and I did a lot more with the teaching,” Denson said. “The more I taught, the more I fell toward the teaching part than the coaching.”

Denson and his wife Tina are both educators and were also each the first in their families to go to college.

“We had some influential people in the county that talked to us and let us know education was a good way to strive to do more in life,” Denson said.

Denson and his wife have two children, Gabe and Whitney.

He went to Wallace Community College Selma for two years and then graduated from Montevallo before he began his career.

“To be a beginning teacher, you try to emulate teachers that had a big impact on you, and I had several really good math teachers,” Denson said. “I had some teacher really influence me on how to be a teacher … and I had the background so when I got into the classroom, I just fell into it.”

Denson is now a seventh and eighth-grade math teacher at Martin Middle School and is also over the robotics program. He also is the assistant baseball coach at Dallas County High School.

“Teaching is a job. Each day you strive to make the kids more successful, give them a chance to be successful in their future,” Denson said. “If they’re successful, then I feel good. It’s a job that you feel like coming to work.”

Denson has taught for 25 years but had also served in many other roles.

He’s been a teacher, assistant principal, principal, coach and athletic director, but Denson said he still prefers the classroom.

“It’s much better being in the classroom,” Denson said.

Denson said math, or algebra specifically, can be hard for many students, so he does his best to come up with ways to break it down and give real-world examples of how they will use the information in the future.

With the robotics, not only can he give examples, but the students actually get to put their knowledge to the test.

“It’s a little more hands on and a little more open,” Denson said. “It’s amazing. It gives you a different look than the classroom and how the work can really be used. We build a lot of things, so we bring math into the application.”