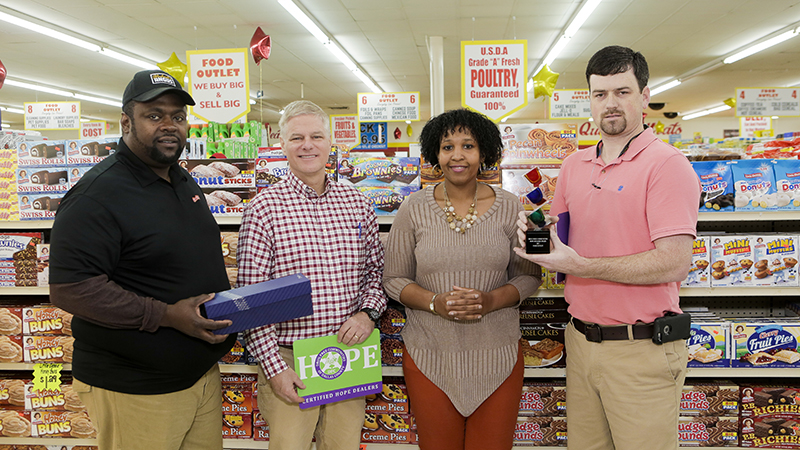 Although Selma Food Outlet has only been open for a few weeks, it is already being praised for its business.

“This honor is given to stores that meet the criteria of being completely drug and substance free,” said Jerria Martin, director of Drug Free Communities of Dallas County.

Martin said the organization sent people out to various stores in the county to see if any were alcohol or tobacco free, but none met the criteria.

“Our students, who we call junior hope dealers, completed environmental scans where they go into the stores with a survey to scan them to see if they have alcohol, different tobacco products or marijuana paraphernalia,” Martin said. “Unfortunately, 15 out of the 15 stores that were surveyed had some form of those.”

Having none of the 15 stores meet the requirements, Martin said she was excited to find out that Selma Foot Outlet did after they opened.

“It was very encouraging to see that the Food Outlet decided to go a different route,” Martin said.

Joseph Fuller, owner of the Selma Food Outlet, said he was surprised to find out that his store was receiving the honor.

“I was blown away. I had no idea and was not expecting it. We’re not doing it for an award. But we are definitely very thankful and honored to accept this on behalf of Drug Free Communities and the hope Dealers Award,” Fuller said.

“It hasn’t really sunk in yet that I got an award for something I was going to do anyways. It’s just the way we do things.

“We have a different approach than some people, and we’re just glad that we were chosen to accept it.”

Fuller said none of the Food Outlets in the area sell any of the products or merchandise.

“We do not sell any kind of alcohol or tobacco at any of our locations. Is goes back to a little bit of faith. The way our concept is, we try to keep our stores as neat and as clean as possible,” Fuller said.

“We’ve always taken this route, and we’re firm believers in not selling it. We’re here for the community, and we’re here to serve groceries.”

Martin said she hopes the program will show kids that it’s OK to say no to tobacoo, alcohol and drugs and lead by example for future generations.

“We’re hoping to foster an environment where our young people can see that it’s not OK to abuse alcohol and to use it while under age, and it’s definitely not OK to sell marijuana or to buy it,” Martin said.