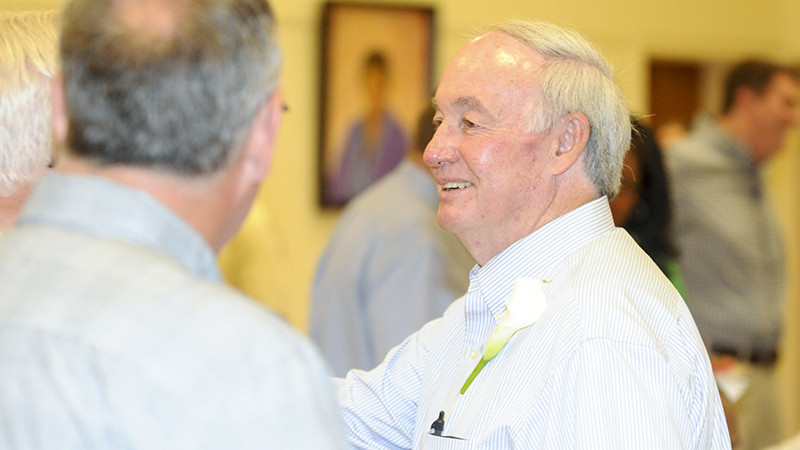 It was almost fitting that Art Scroggins’ last day after almost 45 years with Alabama Power Company was a stormy one. 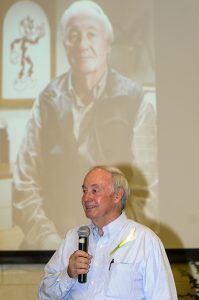 Art Scroggins has been with Alabama Power since July 1972.

Scroggins retired Thursday after 44 years and nine months with the company and during that time worked hundreds of power outages across the country throughout his career.

He retires as the Selma District Superintendent and except for a brief stint in Greenville spent all of his career here.

His impact on Selma and the district as a whole was evident by the large crowd that attended a retirement ceremony Thursday afternoon at the Carl C. Morgan Convention Center.

Scroggins came to Selma on the Fourth of July weekend in 1972, loading up his 1955 Chevrolet with everything he owned: “My clothes, my stereo and my shotgun — that was it.”

“I did not know a soul that worked for Alabama Power. I didn’t know anybody in Selma, Alabama,” Scroggins said. “All I knew about Selma was what I seen on TV, and it wasn’t real inviting at the time.”

Scroggins said he had the choice of going to Selma or Wetumpka, which was closer to his hometown of Tallassee, but told the powers that be that he “just wanted a job” and Selma was his assignment.

“Almost 45 years later, I’m here still in Selma. And somewhere along the way, I met a lot of people … I did some crazy things early on. You don’t get anywhere in life by yourself. I’ve just been blessed with great employees and good friends and a good family and people around me,” Scroggins said. 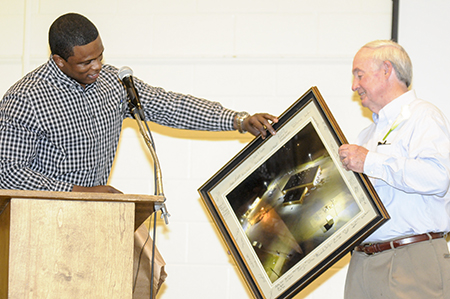 Alabama Power engineering supervisor T.J. Pruitt gives district superintendent Art Scroggins a photo of the Selma crew headquarters that was taken with a drone. The photo’s frame was also signed by Alabama Power employees. Scroggins retired Thursday after almost 45 years with the company.

Several of those people Scroggins has worked alongside through the years spoke Thursday about what he has meant to the company over four decades.

David Looney, southern division general manager, told the audience that Alabama Power was founded in 1906, meaning Scroggins has been with the company for 40 percent of its history.

“Forty percent! I know Alabama Power appreciates that, and you have been a great part of the history of Alabama Power,” Looney said.

In addition to his local work, Scroggins has led storm recovery efforts in Alabama and even helped other utilities as far away as Texas and New Jersey.

Looney couldn’t help but notice the coincidence of stormy weather on Scroggins last day on the job, asking Scroggins if he was on the clock until midnight, to which Scroggins laughed and said, “No.”

“That’s the first time he has ever said no when it came to getting somebody’s lights back on,” said Alabama Power Vice President Danny Glover. “He would always say yes, and he would always lead the pack.”

In addition to his work with Alabama Power, Scroggins is past Selma Rotary Club president; chairman of the local Easter Seals; and a deacon at First Baptist Church.

Attending the program with Scroggins was his wife, Dale; sons, David and Scott;other family; and many friends.

In his retirement, Scroggins said he plans to take a fishing trip in May and asked those who attended his ceremony to let him know if they know of any good ponds.

“I still love my job. I still love these people. They say you will know when you are ready, and I’m ready,” Scroggins said.