Girls Player of the Year: Williams led Saints to playoffs 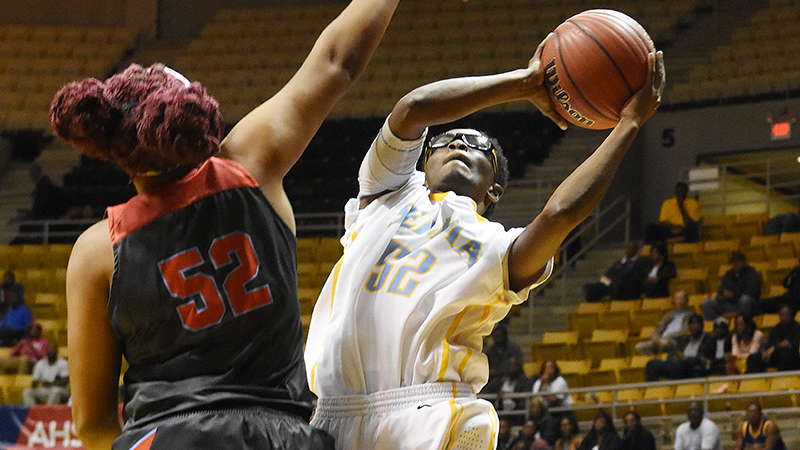 Selma High School senior Areyana Williams shoots the ball in a game against Hillcrest-Tuscaloosa in Montgomery in February. --Daniel Evans

Williams averaged 13.6 points and 6.2 rebounds per game this season and played a major role in Selma’s 27-3 season, which included a spot in the state quarterfinals. Williams started playing for the Saints in eighth grade, but has scored 1,505 points in her last four years, a career average of 12.6 points per game.

She also averaged 7.5 rebounds per game in her career.

“It makes me feel good,” Williams said of the honor.

Selma saw its season end with a 46-41 loss to Hillcrest-Tuscaloosa in the 6A Central Regional final in Montgomery.

It’s been over a month since her final basketball season ended at Selma High, so Williams has had a chance to reflect back on all the team accomplished over the last four years. Selma made three trips to the Central Regional in the past four years.

During her junior season, Williams dealt with a shoulder injury, which limited her at times.

She made the all-tournament team in Montgomery and was the only Saints’ player in double figures in the season ending loss to Hillcrest in Montgomery.

Williams became known for her ability to get up and down the floor quickly, a speed that was deceptive for opponents. That ability allowed Selma’s guards — Jacquetta Dailey and Kynadra Lewis — to find her down the floor for easy points in transition.

Selma girls’ basketball coach Anthony Harris tried to talk her into running track, but he never got her to. Even though she didn’t, her speed and height made a big difference on the floor.

“When I got to coach Harris, I started running more. He would ask why I don’t run or run track and I would ask my grandmother and she wouldn’t want to spend all that money on it,” Williams said with a laugh.

“It would’ve been good for me, but I always ran.”

She was not only Selma’s leading scorer, but also the team’s leading rebounder.  She said she lifted weights every day to work on her vertical leap.

“I would run with weights on my legs, leg presses and also go to Eric Jackson, one of my physical therapists, and he would help me strengthen my legs more,” Williams said.

Williams’ teammates Jacquetta Dailey, Jamya Smith and Kynadra Lewis were also strongly considered for the girls’ player of the year award, as was Keith’s Shatavia Moore.

Williams, Dailey and Smith — all seniors — finished their careers with records of 101-22, according to the team’s page on Maxpreps.com.

Moore averaged 18.6 points per game for the Bears.

Coach of the Year: Harris continued run of success…