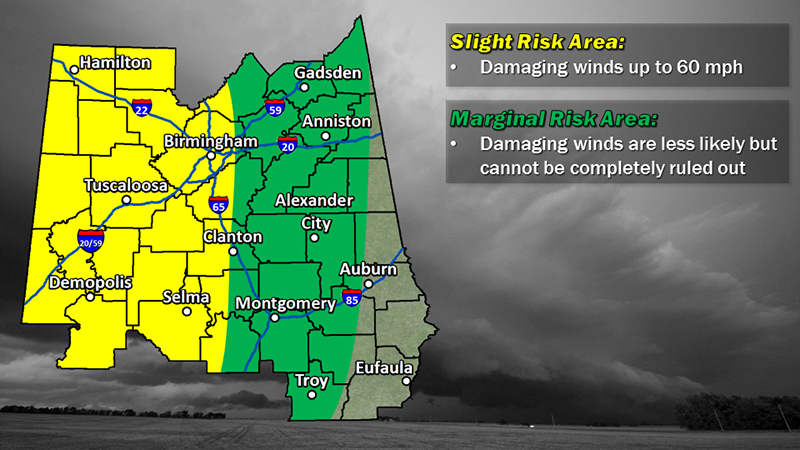 There is a slight risk for damaging winds across most of west central Alabama from 11 a.m. to 7 p.m. Saturday.

A line of severe thunderstorms could put a damper on the weekend for Selma and Dallas County.

The storms are part of an upper level storm system expected to move in late Saturday morning.

“We expect a chance of strong, severe storms Saturday that is going to be most likely in the midday time frame,” said Holley Allen, a meteorologist with the National Weather Service in Birmingham. “So we’re looking at maybe as early as 11 a.m. and as late as probably 3-4 p.m.”

The west half of central Alabama, including Selma, is in a slight risk area, while the east half is in a marginal risk area. Allen said the main threat of the storm system is straight line winds up to 60 miles per hour.

“There is a chance of some damaging straight line winds, and that’s really the main threat,” Allen said. “This looks like an event where the tornado threat is very low, and we’re not really even highlighting that because it’s so low.”

The storms are expected to last for a few hours, but they should be moving out before nighttime.

“We’ll carry that through to 3-4 p.m. for Selma, and then the storms are going to start to shift eastward,” Allen said. “There might be some lingering activity during the evening hours Saturday decreasing once we get past midnight.”

The storm could bring an inch of rain to the area, but is not expected to bring much more than that.

“Due to the convective nature of the activity, we could see some locally heavy rain with maybe up to an inch on average across the area,” she said.

There is a low chance of showers and thunderstorms Sunday.

“Those will be just general thunderstorms,” Allen said. “The severe threat will end once we get past the daytime hours on Saturday, and then there is another chance of storms on Monday, so we’ll have to kind of keep our eye on things once we get into the early part of next week.”

Anyone with outdoor plans should be weather aware and have a way to access the latest forecast.

“A lot of people have outdoor plans, so definitely have a way of getting weather information,” she said. “There are a lot of great apps out there and you can visit our webpage at www.weaher.gov/bmx for the latest information.”