Perry has served as dispatcher for 22 years 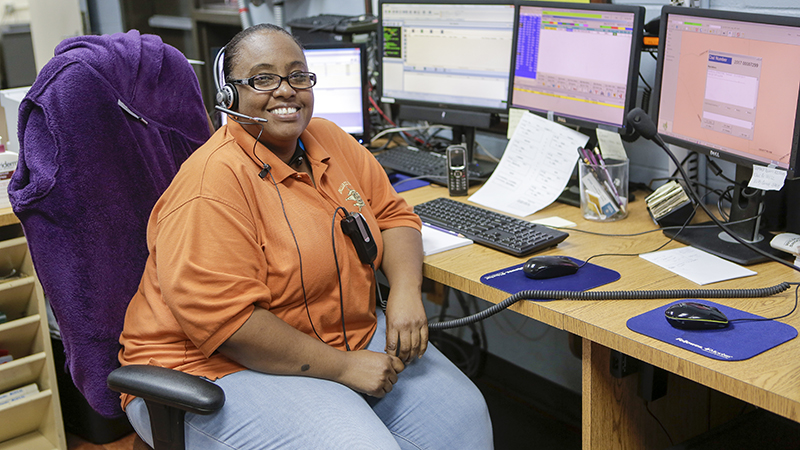 Ernestine Perry poses for a photo at her desk inside the Dallas County Consolidated E-911 Communications Center. Perry has been a dispatcher there for 22 years.

When someone has an emergency in Selma or Dallas County, Ernestine Perry’s voice could be the first thing they hear after dialing 9-1-1.

When the phone rings, Perry has to be prepared for anything.

“You never know what you’re going to get when you answer the phone, so I just try to keep the same frame of mind,” Perry said. “I just keep a calm tone and tell them to breathe a little bit. Calm down and just slowly tell me what’s going on.”

Perry is a senior dispatcher for the Dallas County Consolidated E-911 Communications Center. She started working there 22 years ago when it was still run by the city. It is now operated by the county.

Every 9-1-1 call in Selma and Dallas County goes through the center, and dispatchers answer hundreds of calls per day.

“I tell everyone good news does not come through 9-1-1,” she said. “There’s no good news, and you really just have to take it all in stride because it can be mentally stressful to you to always hear somebody else’s problems.”

While on the job, Perry has to be on her toes at all times not to miss an important detail given by the caller.

“When the phone first rings I myself try to be on point, listen to what they’re needing and do my best to get them that. I try to keep in mind the situation that they’re in,” Perry said. “What if it was me? So, I do my best to try to remain as calm as I can and collect as much information as I can and not so much dwell on what I can’t do for you but what I can do for you.”

Perry said a lot of people think dispatchers just answer the phone, but there is a lot more to it than that.

“That’s a big part of what we do, but we also have to deal with our officers. When we’re on the phone we collect as much information as we can because we’ve got to keep them safe as well,” Perry said. “They’ve got to have some idea of what they’re walking into.”

Perry said sometimes people get aggravated with all of the different questions they ask, but it could mean life or death depending on the situation.

“I try to keep the same questions. Where? What? Who? When? The basic stuff. It’s just gathering as much [information] as you can,” she said.

Being a dispatcher can be stressful, especially when someone on the other end is panicked or screaming, but she enjoys helping people and making sure they get the help they are looking for when they dial 9-1-1.

“It feels good to know that I did that,” she said.

“Nobody else knows it, but I know I did that, so it’s a really good feeling. It’s something you wish you could pass on to the next person.”

Dispatchers also have to deal with accidental calls, prank calls and even calls mistaking the office here for being in Texas.

“We get that a lot,” she laughed. “So we wrote down the [Dallas County Sheriff Department’s] number in Texas, and we give them that number.”

She said her co-workers make it easy to get through the day.

“It can be stressful, but what helps me is the group of people I work with. We’re just cool,” she said. “If I see her having a hard time, I’ll step in and do whatever I can to just make it go smoothly. The people I work with help a lot.”

Outside of work Perry likes to stay off the phone as much as possible.

“I sleep because I work part-time at Wallace with their campus police as well,” Perry said. “Any moment I have by myself I greatly appreciate it. No phones. I’m a homebody. I really am. I love being at home.”