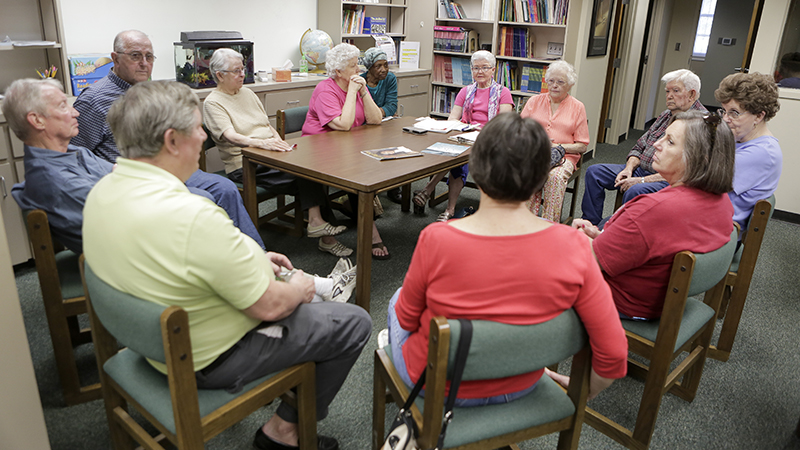 Caring for a family member with Alzheimer’s disease or dementia is never easy, but the Selma-Dallas County Alzheimer’s Support Group that meets every month at the library has made it a little easier for some caregivers.

Norma McCrory, who leads the group, has been a part of the support group since 1995. She got involved after she became a certified dementia trainer, and has been involved in the group ever since.

“It’s just an opportunity for people to come and share and get knowledge, share knowledge and get ideas,” McCrory said.

Just as they do every third Tuesday of the month, the group met at the Selma-Dallas County Public Library at 5 p.m. As each member came, they signed in and pulled up a chair to form a circle.
With two new members coming for the first time, McCrory had everyone introduce themselves. She then went around the circle letting people give updates since the last meeting, share their experiences or ask questions.

“We’re very informal in here,” McCrory said with a smile. “If we have a new person, we just introduce ourselves to everybody and then we all share anything that has taken place or anything we want to share since the last meeting.”

There are about 15 members that come regularly, and McCrory said more are welcome.

“There are numbers of people in here who have already lost their loved ones and they’re still coming because they have lots of experience,” McCrory said.

Some of them are currently caring for a loved one, and some of them still come to the group after their loved one has passed away to share their experiences and help others that may be dealing with some of the same problems.

“To hear other people having the same issues … it was worth everything,” said F. Scott Hereford, whose wife passed away in August from Alzheimer’s.

Judy Golson’s mother passed away nearly five years ago, but she still comes to the support group.

“I still come because I love the group, and maybe my experiences can help somebody who is just going into it, who is just beginning to go through this,” she said.

Melba Chandler, who drives from Autauga County to be a part of the group, said it has helped her with her mother who has Alzheimer’s disease.

“I live out in the middle of nowhere in the country. I hadn’t seen a lot of this,” Chandler said. “One of the sitters who was staying with my mother in her home at the time heard about the meeting and told me about it. She came with me to the first meeting, and when I walked out the door I was like I have found somebody who knows what I’m going through.”

McCrory said anyone is welcome to join the group.

Perry has served as dispatcher for 22 years