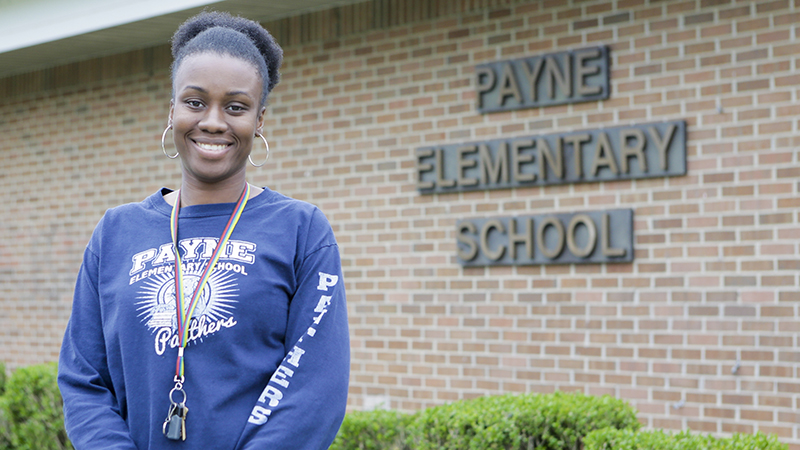 Payne Elementary School fourth grade teacher Breunde Moultrie was born and raised in Selma and is a product of the Selma City Schools System.

She stayed in Selma after graduating high school and attended Concordia College Alabama, earning a teaching degree to put right back to use in the only place she’s ever called home. But it’s not just through attending Selma schools that she got to know the system. She also grew up watching her grandmother, the late Mattye Babcock, teach math in the system for 33 years.

“She really was one of the reasons that I became a school teacher,” Moultrie said.

Moultrie said she remembers being out with her grandmother shopping and former students would run up and speak to her and be excited to see her. That’s when Moultrie knew she wanted to follow in her grandmother’s footsteps.

“I can remember being with her, and we would be in the store or somewhere and she would have grown people coming up to her … and they were just so excited to see her,” Moultrie said.

Babcock was diagnosed with cancer while she was interning and passed away before she graduated.

Moultrie has had a life-long dream of becoming a teacher, and still remembers dressing up as a teacher for school as a young child.

“I can remember back when I was in pre-K having a program where the students were able to dress up like what they wanted to be when they grew up. I still have the picture of myself and a cousin, Alicia Johnson, standing onstage with our white dresses on, an apple in one hand and a ruler in the other,” Moultrie said. “We wanted to be teachers, and we both became teachers.”

Moultrie now has a family of her own. She has two boys, Brenden, 7 and Braxton, 2.

With Dallas County having one of the higher unemployment rates in the state, Moultrie said she knows many of her students come from poverty stricken areas, and she strives to not let that be a factor in their education.

“I just try to encourage them not to be a product of their environment. In the long run, you see the impact that you’ve put on them, and it warms my heart to know that I’ve made that impact on them,” Moultrie said. “I just try to tell them, it doesn’t matter where you come from. I’m from this area too, and I went to college and became a teacher, so you can do whatever you want to do is what I want them to know.”

Overall, Moultrie is just glad that she gets to do something that she loves every day –– making an impact on the lives of children.

“One of the things I enjoy most about being a teacher is to see how much the students have grown at the end of the year and to know that I’ve played a major part in it,” she said. “It’s a blessing to wake up in the morning and go to a job that you love.”