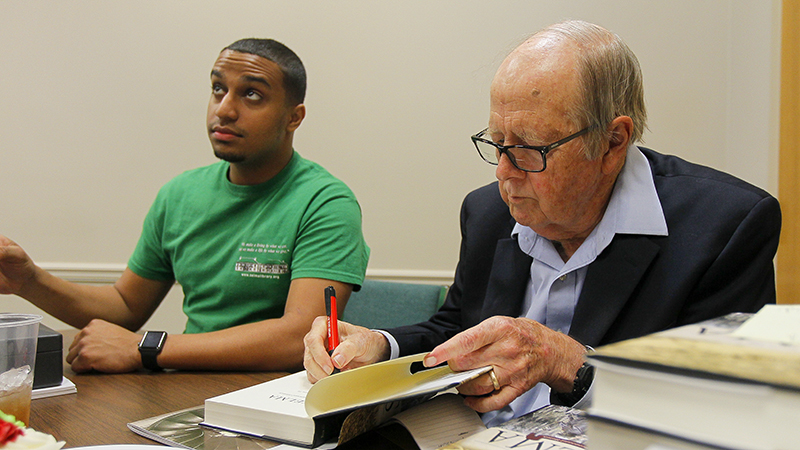 Selma is known worldwide for its part in the Civil Rights Movement and the Civil War, but historian Alston Fitts’ new book tells many of the stories before, in-between and after those two key moments.

Fitts was the guest speaker for the Selma-Dallas County Public Library’s Lunch at the Library program Thursday, speaking in front of a packed house.

“I’m glad that I was able to tell some of the other stories,” Fitts said.

His new book is called “Selma: A Bicentennial History.” It’s the second book Fitts has written about Selma’s history. The first was published in 1989 at the request of the Selma City Council, and Fitts was only given six months to write it.

Fitts said he had longer to write the second book and more spare time, although he missed the help of his children who helped him research for the first one.

“The kids were a fantastic help,” Fitts told the crowd. “I’ve never forgotten our youngest who at that point was just 10 [or] 12 years old observing one day as we got into the car headed off to the archives. She said, ‘You know Spike who lives down the street? His parents never take him to the archives.’”

Fitts also joked about his oldest daughter getting her school friends to help.

“Our oldest … was a bit more aware, but she did the Tom Sawyer bit,” he laughed. “She told her friends at Westside Middle School, ‘I get to go to the archives with my daddy on Saturday, and if you’re nice to me I’ll see if he can’t take you along for a fun day at the archives.’”

Fitts’ new book starts with Selma’s beginning in the early 1800s and spans to the early 2000s, touching on topics like the Civil War, Selma’s rise from the ashes after much of the tow was burned to the ground by Union troops, the Voting Rights Movement and some of the issues Selma was faced with in the 1990s and 2000s.

His new book is available at the library and Selma Interpretive Center, as well as online on Amazon.