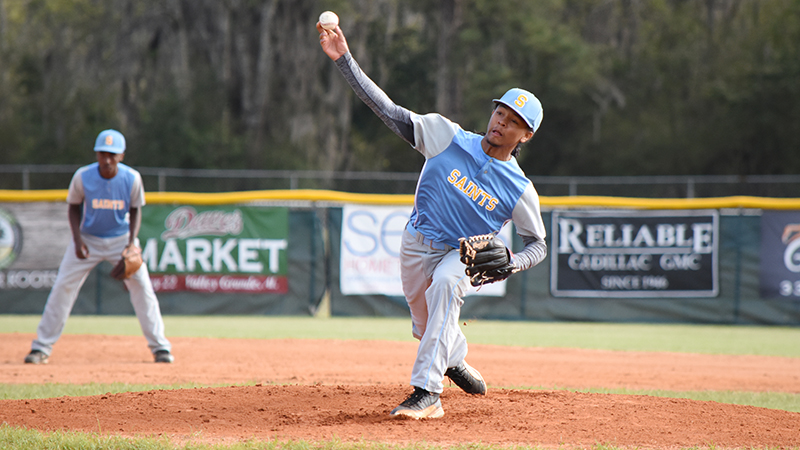 Selma High School senior Damian Murry played in his first game of the season Thursday and pitched five innings to lead the Saints to a 7-3 win. --Daniel Evans

Selma and Southside entered Thursday’s rivalry game in need of a victory. Selma found a way to get that win.

The Saints (2-6) scored five times in the first two innings and held on for a 7-3 win over the Panthers at Bloch Park.

The Saints must’ve gotten the message because they finished off the Panthers Thursday.

Nicholas Parnell’s RBI double to center field scored Rondarius Sanders in the first inning to put the Saints ahead 1-0. Selma would score two more times in the inning on a double by Amarian Molette and a wild pitch that allowed Molette to run home.

Southside (1-5) answered with a run of its own, as Kehsawn Arrington scored on a groundout by Keterius Jones, but the Panthers couldn’t do any more damage.

In the second inning, a single by Selma senior Damian Murry, who was playing in his first game of the year, scored Sanders and Parnell and extended Selma’s lead to 5-1.

“All of the kids are pretty excited about him coming back,” Matthews said of Murry. “It boosted the team moral.”

Murry, who also started at pitcher, didn’t need any more insurance runs. He allowed only two hits in five innings before giving way to Nicholas Nettles., who allowed two runs in the sixth inning but finished the game off for the Panthers.

Selma added a run in the sixth on a wild pickoff throw to third base and on a sacrifice fly in the seventh inning by Molette, which scored Parnell.

“I think we had two errors in the first inning and that cost us a couple of runs, but things you can work on — fielding and being in the right place at the right time,” said Southside coach John Solomon.

The Panthers have started slow in their last couple of games.

On Thursday, Southside allowed just two runs in the last five innings, but the Panthers were already down 5-1 by that point.

Last week, Southside trailed by six to Dallas County before a late rally that briefly gave the Panthers the lead.

Solomon said the team is still working through taking the field already in rhythm.

“You’re nervous, I haven’t had my time to bat, the ball hasn’t come to me yet — things like that. When they get that out of their system and realize they can actually play baseball they’ll be alright.”

Mar’Quavean Murry was the starting pitcher for Southside and he threw a complete game. Mar’Quavean had six strikeouts in the game.