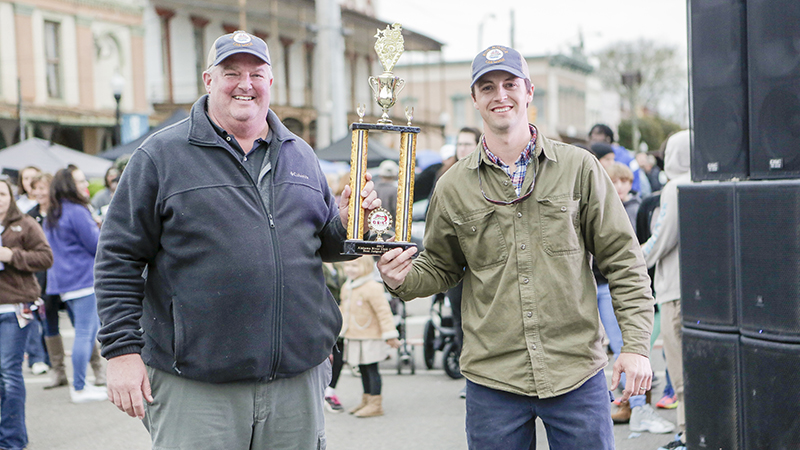 Davis Henry and Ware Cox hold up the trophy for first place at the sixth annual Alabama River Chili Cookoff.

Although the temperature was a little chilly outside, hundreds of people still made it out to Water Avenue to heat things up with some warm chili.

The sixth annual Alabama River Chili Cookoff hosted by Selma-Dallas County Leadership Class XVIII drew large crowds in an effort to have fun, eat well and give back to the Central Alabama Child Advocacy Center.

“It’s been pretty amazing. Every year it gets better,” said Ebony Rose, a class member. “Each year is a different feeling and this year it felt a little challenging at first but we prevailed. We had an amazing time. It just feels like a turning point for our community and we love how this event makes people feel.”

Although the totals for Thursday’s event are not finalized, Rose said the class has raised more than $50,000 in the last six years.

“That’s amazing and that money goes directly to charity,” Rose said. “People give generously to it and we really appreciate them for that.”

Henry Brick Company took home the win with first place as voted on by the judges.

“This is our second win. We won the first year and now this year, so it’s good to be back on top,” said Davis Henry, one of the owners of Henry Brick. “This has been a great event since it started and to see the number of people that are here every year to support the different causes that Leadership Selma is supporting is really good. It’s what it’s all about, getting together as a community.”

Henry said the team’s chili was a traditional recipe with nothing fancy.

Henry said he and his team were excited to win, and he plans to continue participating in the cookoff each year.

“I’m always excited to win,” Henry said. “We haven’t missed a year yet, so we’re going to keep plugging away.”

Ken Moreland of the Riverdale Credit Union team said this was his first year competing, but he has made it out to the cookoff before.

“Anything to bring everybody out in Selma, Alabama and help a charity at the same time is very worthwhile,” Moreland said. “I have a great time down here. I enjoy being down on Water Avenue and meeting everybody and seeing people we don’t get to see every day and new people.”

“It’s our third year doing it and we thoroughly enjoy doing it,” Ealum said. “You see people that you don’t see but once or twice around town all year and everybody gets out and has fun and you’re helping out a charity on top of that.” 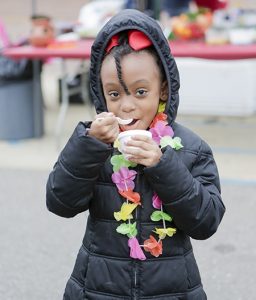 Shuntelra Logan, team Wallace Community College Selma with chef Tommy Smith, said she was happy to participate in cookoff and that she considers everyone a winner.

“This is our first year to participate in the Chili Cookoff,” Logan said. “The recipe is from the heart and soul. We just decided to mix some ingredients together and just give the fans and the customers some love.”

Logan said they used some tomatoes, meat, seasoning and the most important, some love.

“I am enjoying this,” Logan said. “To have this atmosphere here and bring in the community for something fun for a good cause, it’s exciting. It’s more than just a chili cookoff. It’s seeing the community come together.”

Rose said she also couldn’t do it without the help and support of her team that works every year to put on the cookoff, the title sponsor Moore-Stewart Ford and the teams and people that attend.

“I want to thank all of our new teams, our old teams and people that continue to give year after year for this event,” Rose said.

“It starts off slow and then when we get here it’s amazing. It’s a very humbling experience.”