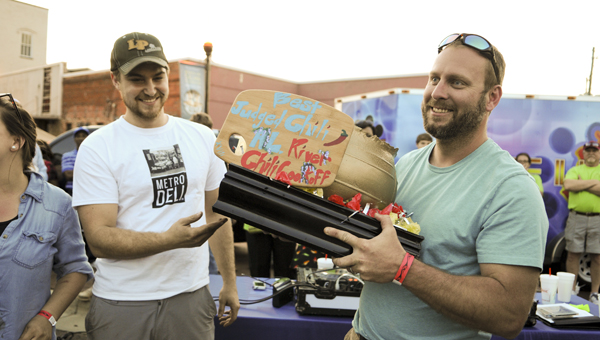 The weather has been quite chilly this week, but Selma-Dallas County Leadership Class XVIII is hoping to heat things up Thursday for the sixth annual Alabama River Chili Cookoff.

“We are real excited. We’re going to have perfect chili weather,” said Leslie Free, one of the organizers with Class XVIII. “My whole team is ready. We’ve been planning this for several months, and we’re ready for it to be here.”

Free said 27 teams will compete in this year’s cook off.

“That’s about the normal [amount] of teams we have every year, so we are so thankful for all of the continuous support we have from our community with area businesses and individuals that enter a team for the contest,” Free said.

Teams will compete for first, second and third places in the cook off as well as the spirit award for the best-decorated booth and most-spirited team and the fan favorite award.

Free said she is excited to see the teams get everything set up starting at 10 a.m. on Water Avenue so the cook off can get started.

“Once they start coming in and setting up, the whole street starts to come to life,” Free said. “They start decorating, and once they start cooking the chili you just walk around and see everybody’s tent and look at them. A lot of teams go all out with decorations and everything, so I can’t wait.”

Teams will start cooking at 11:30 a.m., and gates will open for everyone else to join in on the fun and eat all the chili they can at 4 p.m.

“We have averaged between 800 to 1,000 people on Water Avenue on a Thursday night for that short period of time,” Free said.

“It is awesome to see the community come and support it. It’s just great. Everybody has a lot of fun. It’s very family oriented, and we can’t do it without the support of the community.”

Teams will be judged this year on tomato-based chili only and are required to cook one quart for the judges. They are also asked to cook at least five gallons for everyone else to sample during the cook off.

“We’ve got 27 teams cooking, so it’s going to be a really good variety of chili for everybody,” said Becky Glaze, who also helps organize the cook off. “All of them put forth their best effort, and it’s a really good, fun time.”

Admission is $5 per person. Children nine years old and younger get in free. The money raised will go to the Central Alabama Child Advocacy Center, which is this year’s charity Class XVIII chose to donate to.

“We’ve raised over a grand total of $35,000 that we’ve given to charities [over the years], and we hope to improve on that,” Glaze said. “We just try to put some of the money back into the community for people that really need it.”