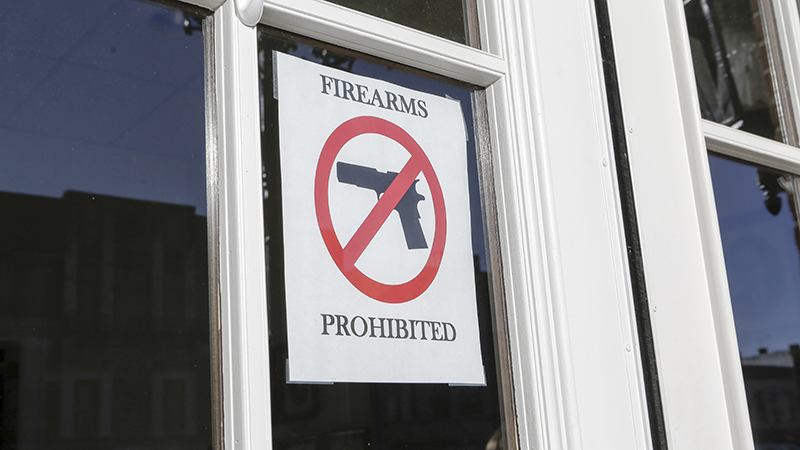 A sign posted outside of Selma City Hall recently restricts firearms inside the building.

A sign has been posted on the entrance of Selma City Hall restricting firearms after the Alabama Attorney General’s office launched an investigation into a complaint filed by a citizen who was denied entry into the building while carrying a gun.

The complaint was filed in February by David Blackmon. A video posted to Facebook by Blackmon, who was on a homeschool field trip with his two daughters, shows he was denied access to city hall by a security guard.

“I informed the security guard that I was carrying a firearm, and he told me that I was not allowed to carry a firearm into city hall,” Blackmon wrote in his petition to the attorney general. “However, there is no sign posted outside the building stating that firearms are restricted.”

The city received a letter from the office of the Attorney General dated March 7 requesting a response within 30 days explaining if the city “lacks the required signage” or not.

Nunn told city council members a sign was required to be posted to go along with the security guards and metal detector at the entrance of City Hall in order to comply with state law. He explained to them that without the sign they are not in compliance.

According to Alabama law, a city hall is not one of the buildings listed as restricted for firearms unless a city council meeting is in session.

Nunn told council members if there is no security guard or metal detector, then anyone is permitted to come into city hall that is legally carrying a firearm, whether it is openly or concealed with a permit.

Mike Lewis with the Attorney General’s office said they cannot comment at this time.

“We can’t comment on that because that is a gun determination that is something we haven’t received any information on as of this time here in the press office,” Lewis said Wednesday in a voicemail returning a phone call from the Times-Journal.

“The normal process is we receive complaints from the general public, and we investigate those. Over a period of time a decision is made, all the parties involved are consulted, and then once it is all settled an announcement is made from our office and the result is posted on our website.”

Lewis said the Attorney General’s office was in the process of announcing several gun determinations, but none of them were about Selma, which indicates it could still be an ongoing case.

Nunn told the council he intends to follow-up with the Attorney General’s office.

“We are going to take pictures and respond accordingly to the AG’s office to let them know that we have complied,” Nunn said during the work session.