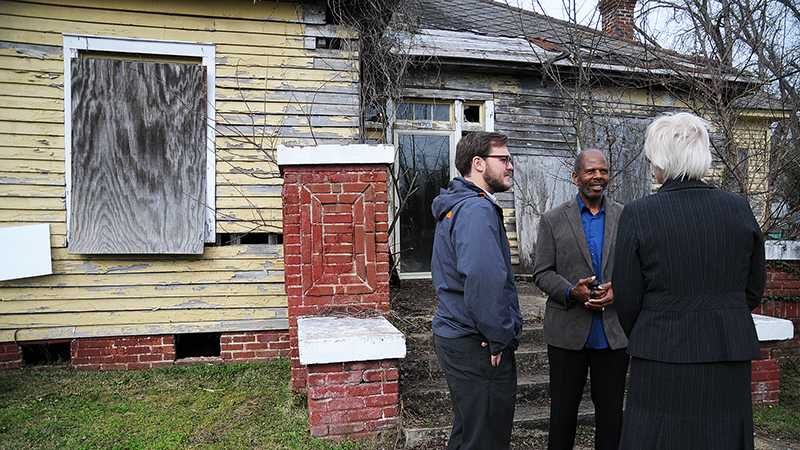 Philip Brown with Gateway Education Foundation, Inc. talks with Sheryl Smedley and Landon Nichols with the Selma and Dallas County Chamber of Commerce outside the Boynton House last week.

Two nonprofits are coming together to help save a Selma landmark.

Gateway Educational Foundation, Inc. in collaboration with the Spill The Honey Foundation is launching a 12-month fundraising and awareness campaign to turn the Sam and Amelia Boynton House into a wax museum.

The nonprofits announced their plans during a press conference last week.

“The home is the birthplace of the  Voting Rights Act of 1965. This museum will honor the men, women and children who changed America while charting a new path to freedom for African American people using the vote,” said Philip Brown with the Gateway Education Foundation, Inc., which has owned the house for eight years.

After Sam’s death in 1963, Amelia Boynton continued fighting for the cause and was one of the Courageous Eight, who invited Martin Luther King Jr. and Southern Christian Leadership Conference to Selma.

The home was used as a meeting place for Dr. King and others during the voting rights movement.

Two years later, the country woke up the morning of March 8, 1965, with a photo of Amelia Boynton across the front pages of newspapers from coast to coast. The 53-year-old mother had been beaten unconscious during what is now known as Bloody Sunday.

That image and others of  peaceful protestors being attacked by Alabama State Troopers and Sheriff Jim Clark’s deputies showed the world how serious the fight for voting rights had become and resulted in a groundswell of support for the Selma to Montgomery march and, eventually, the Voting Rights Act of 1965.

While Boynton moved from Selma decades ago, there will always be a place for the matriarch of the Voting Rights Movement in the Queen City. Several years ago, the city of Selma has named a street in honor of her and her late husband, Sam Boynton.

However, the home has significant damage and is mostly gutted on the inside.

The Alabama Trust Historical Preservation and the Alabama Historical Commission has listed the former Boynton family residence as a “Place in Peril.” Places in Peril is a list of the state’s most endangered historic places.

The house was sold by the National Voting Rights Museum to the Atlanta-based Gateway Educational Foundation in 2009.

Gateway has previously attempted to fundraiser for the museum, which could cost as much as $1 million.