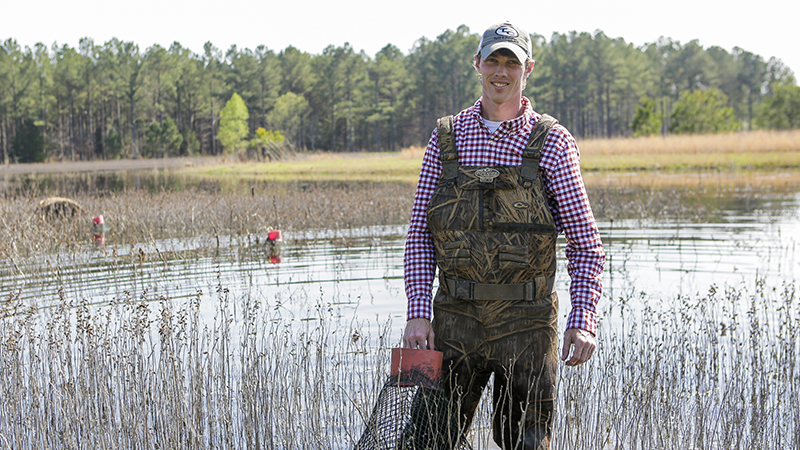 Blaze Malone traps crawfish in one of his three ponds. He has been raising and trapping crawfish since he was 15, 12 years ago. --Alaina Denean Deshazo

At only 15 years old, Blaze Malone decided with the help of his dad, Randy Malone, he was going begin raising and trapping crawfish.

“The first year I got started I didn’t really trap very many because I didn’t really know what I was doing,” Blaze said. “I sold them to some of my buddies for cookouts, then I got a bunch of T-shirts made and some business cards and by the second year it was all I could keep up with.”

Malone said he now sells anywhere from around 300 pounds on a slow week to 1500 pounds on busy weeks.

Blaze said he got the idea from a friend, and after talking it over with his dad, they decided to go to Louisiana and buy several thousand pounds of crawfish to get started.

“I owe everything to him. He actually built the ponds, bought the traps, everything and then I slowly paid him back as I could,” Blaze said of his dad. “I definitely couldn’t have done it without him.”

Blaze now has three crawfish ponds he takes care of himself, which requires him getting up early and sometimes staying up late after his full-time job.

“I do it every day,” Blaze said. “I get up about daylight and run traps and it takes about two hours to do it.”

Blaze said he enjoys working with the crawfish for several reasons, one being just getting to spend time outdoors. Growing up in Dallas County, he grew up hunting and fishing with his family.

“I’ve been hunting since I could walk. My dad loved it, my granddaddy loved it and I’ve just been doing it since I was little bitty,” Blaze said. “I just enjoy being out with family. It’s slow paced, not stressful. That’s my time to get away and forget about everything, just go out and relax and have fun. I just enjoy getting outside and doing it. It’s a lot of fun.”

Besides spending time outside, Blaze said he likes to meet new people through selling his crawfish.

“There’s a lot of people I may see them one time to get a bag of crawfish and never see them again, then I got other friends that I talk to on a daily basis and I met them through selling them a bag of crawfish.”

Blaze said he plans to continue to raise and trap crawfish for as long as he can.

“As long as I can do it and make it work around my work schedule and all, I’ll continue to do it,” Blaze said. “It’s a lot of work, but it’s fun and it’s something different.”

Blaze said the he does accept local orders for crawfish, and that anyone interested can call (334) 375-1718.