Wallace baseball team off to 14-3-1 record 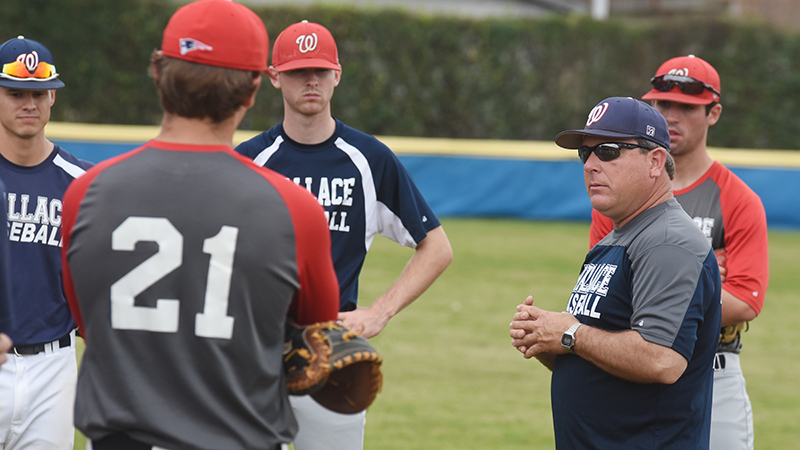 Right now, the team is on pace to do both.

The Patriots have started the year 14-3-1, with the one tie coming against Faulkner University’s junior varsity team in a game where darkness stopped the game before it could finish. Wallace won two games against Concordia College Alabama Tuesday at Bloch Park.

“We’ve been emphasizing the pitching side. We’ve had our starters do well pitching wise,” said Wallace coach Frank Elliott. “When we don’t pitch well, that’s the games that we’ve lost.”

Wallace pitchers have combined for a 4.63 ERA this season and have thrown 109 strikeouts, eighth best in the ACCC. Many of those strikeouts have come from sophomore Colin Lillie, who leads the conference in strikeouts with 38.

“His thing is being able to throw any pitch at any time for a strike,” Elliott said. “When you’re thinking fastball, it’s a change-up and when you’re thinking change-up, it’s a curveball or he throws a slider in there. He has a number of pitches he can throw for strikes whenever he wants to.”

On the offensive side, Wallace has relied on speed. Quintarrious Arrington, Roderick Lucas and Chandler Mullins have combined for 31 steals and routinely swap the team lead for stolen bases. Mullins bats lead off, Arrington second and Lucas ninth, so in many instances those three bat right after the other. Hunter Roberts, who leads the team with two home runs, and Kyle Friday, who does a little bit of everything, come up next.

“If things work strategy wise, if [Lucas] gets on, then we can have two more speed guys right behind him, followed up by a terrific home run hitter,” Elliott said. “Therein lies the key to our offense.”

Wallace started last season 15-5 before the injury bug hit the team. Sophomores Tanner Thomason and Chad Silvani were both injured and required Tommy John Surgery last season right before conference play started, and it took a lot out of the team.

“Our top two pitchers went down before conference play, and it wrecked our whole season,” Elliott said.

The Patriots lost 27 of their final 34 games to end the year and went 6-26 in conference.

“We’ve got a decent team if we just stay healthy,” Elliott said. “If we do look backward anywhere, we want to stay away from the injury bug, not just on the mound but in the field too.”

This year Elliott is hoping for better luck. Freshman Noah Eller, a third baseman, just got back to the team after overcoming an injury. Blake Mayes, who threw 42.2 innings last year, is still out after breaking his foot over Christmas break, but will return at some point this season.

“When he gets himself going, we’re going to add more to the pitching than what we have right now,” Elliott said of Mayes.

Friday has served as the team’s closer when he’s not playing shortstop. He’s pitched 11.2 innings this year and has 12 strikeouts and an ERA of 2.31. Elliott has moved Friday into the team’s starting rotation and he started his first game Tuesday and pitched 5.0 innings and didn’t allow any runs.

“You have to have a different mentality coming in,” Friday said of starting versus closing. “You’ve got to pace yourself. If you come out the first inning and throw really good and hard and don’t have anything left, it sort of defeats the purpose of the start.”

The Patriots will play Lurleen B. Wallace on Thursday. Lurleen has the best record of any team in the ACCC’s South Division at 15-3 and Wallace Selma is second.

The doubleheader is scheduled to start at noon.

“We’ve got our hands full trying to beat those guys,” Elliott said.