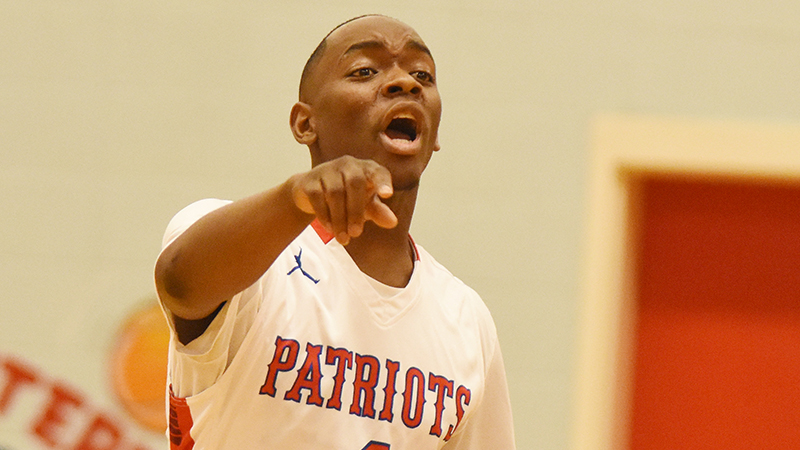 Wallace Community College Selma’s Gene Davis calls out instructions as he dribbles the ball during a game earlier this season. Davis is the team’s leading scorer. --File Photo

At the start of the 2016 basketball season, the Wallace Community College Selma men were looking like one of the top teams in the Alabama Community College Conference. The Patriots began the year 9-2 and looked like a team that was destined for a great season.

The season didn’t play out as planned. Wallace finished the year 17-13, thanks to a stretch where they lost seven of eight and a four-game losing streak in February. The Patriots had to win their last game against Enterprise State just to get into the ACCC Tournament, which starts Saturday.

Even Wallace coach Duane Evans is still trying to figure it out.

“That’s a big question for all of us,” Evans said.

The season has been a roller coaster ride, but the Patriots appear to be back on the rise. Wallace won its last three games of the regular season by double digits, breaking a four game losing streak, and squeezed their way into the ACCC tournament.

The Patriots will be the No. 6 seed and will play at Snead State in the first round Saturday at 3 p.m..

“As coaches, we hope that we peak around tournament time and it seems like we are trying to peak around the perfect time of the year,” Evans said. “We got in, watched a lot of film, corrected a lot of mistakes we were making and saw a lot of things we were doing well and tried to improve on those things.”

When teams are losing, usually it’s a lot of the same miscues — turnovers, bad shots, not running the offense — but Evans said his team was actually moving the ball and taking good, high percentage shots. They just weren’t going in.

The winner will move on to play at Lawson State next week.

“We are working on everything we do,” Evans said Wednesday. “We are going to study Snead’s film tonight and try to pick up on some of their habits, tendencies and come in tomorrow and Friday and work on those.”