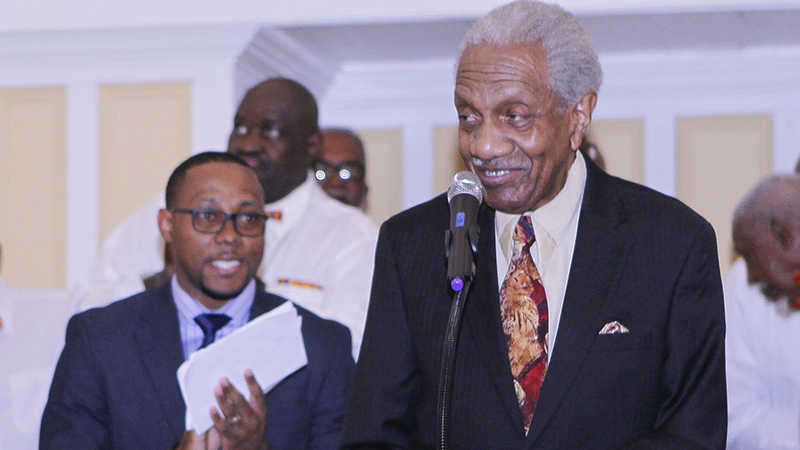 Much like voting rights activists did more than 50 years ago, hundreds of people gathered at Tabernacle Baptist Church for a mass meeting Thursday night to commemorate the 52nd anniversary of Bloody Sunday.

The historic church played host to the first mass meeting in Selma for the voting rights movement in 1963, but Thursday night it played host to Foot Soldiers of the movement and visitors from across the United States that are in town for the annual Bridge Crossing Jubilee.

“I want to thank you for being a part of this 52nd anniversary. We have come to remember, recommit, restore as well as rejoice together,” said Otis D. Culliver, pastor of Tabernacle Baptist.

As Culliver stood in the pulpit, he introduced the Rev. Dr. F.D. Reese, the lone surviving member of the Courageous Eight who invited Dr. Martin Luther King Jr. to Selma, and Dr. Bernard Lafayette, who helped found the Student Nonviolent Coordinating Committee (SNCC) in 1960.

“It is now my privilege to bring you two giant men who have left great footsteps in the sands of time,” Culliver said as he described Reese and Lafayette.

As Reese stood up and walked to the microphone, he was greeted with a round of applause.

“Certainly I am just delighted to be standing here,” Reese said. “After being able to stand in this pulpit so many days, nights and years, the Lord has allowed me to stand here tonight looking at all of your beautiful faces.”

Reese recalled sitting in the church for meetings during the movement.

Lafayette took the podium after Reese, taking his time to point out people in the crowd that were a part of the movement, including members of SNCC and the Freedom Singers. He also said that Reese and attorney Fred Gray, who spoke later in the night, were his mentors during the movement.

“This perpetuous smile on my face indicates to me that we have here in this pulpit giants,” Lafayette said, as he looked back to Reese and Gray.

“They were my mentors, and they’re still here with us. They are why I came to Selma, because I knew I had some serious backing.”

Before the meeting a memorial service was held in honor of Gladys Dunston, who passed away in November of 2016. Dunston served as chairperson of the executive board for the Bridge Crossing Jubilee for two years prior to her death. Faya Rose Toure Sanders, one of the founders of the Jubilee, read a poem in Dunston’s honor, thanking her for her work and her family for being in Selma for the Jubilee.

“What can I say besides we love you,” she said. “She gave so much more than she received.”

The crowd then joined her in singing “I’m Gonna Lift My Sister Up” in Dunston’s honor.

The mass meeting was the first of nearly 40 events planned over the next few days to pay homage to the voting rights movement in Selma.

Officers crashes into apartment while responding to call