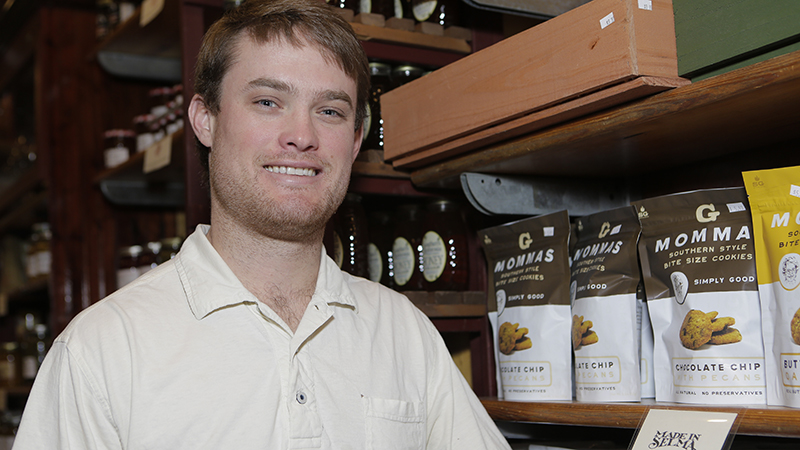 In January, Selma native Robert Armstrong, founder of G Mommas Cookies, learned he had made it to the top nine in the Alabama Launchpad Startup Competition. In February, he was notified that his business was selected to be in the top five. Now, he plans to spend March preparing for the final competition in April to see which business or businesses will be awarded the cash pool of $250,000.

“It’s a big deal. It’s been a lot of work to get to this point,” Armstrong said. “A lot of long days on Sundays and Saturdays to actually get all the requirements done like the business plan and just getting ready for the pitch, putting together the PowerPoint.”

Although G Mommas is currently in more than 1,000 retailers across the country, Armstrong started out on a much smaller scale in 2009. He told the judges a quick version of how he started in Friday’s pitch.

“Each team had eight minutes to pitch and we had 10 minutes of questions afterwards,” Armstrong said. “It was hard for me to cram in eight minutes, my story and where I’m at with the business and where I want to take the business. I talked about how I started which was with two spoons in my hand and a lien against my car and an old abandoned restaurant.”

Armstrong said he started the business because of his grandmother, Anice Morris Armstrong, who made his favorite chocolate chip cookie growing up.

Armstrong said the competition started with 19 businesses vying for a chance to earn the money.

“Being able to get to the final round is pretty exciting considering all the people that are in the competition,” Armstrong said. “There’s some really, really good ideas and some exciting businesses that are in Alabama in this competition and to be among those was pretty cool.”

Armstrong said although the other businesses are from much larger cities, he is glad to be from Selma.

“Being from Selma, it’s pretty cool,” Armstrong said. “I wanted to show some good coming out of Selma, hence the name Selma Good. To be able to do that with the launch pad is pretty neat.”

Alabama Launchpad, a program of the Economic Development Partnership of Alabama (EDPA), funds and mentors aspiring entrepreneurs across the state to foster job creation. Over the last decade, Launchpad has invested over $2.9 million in 61 companies; the startups have created 502 jobs and secured $50 million in additional funding.

Funding awarded is based more on a promising startups’ financial needs and the marketability of the venture, not competition against another team.

“Alabama Launchpad’s goal is to provide startups with the right resources, mentorship and support to realize their true potential to help create jobs for the state and to show that Alabama is a good place for businesses to start, stay and grow,” said Greg Sheek, Alabama Launchpad program’s director.

Armstrong said is he were to receive money from the competition that he would put it towards increasing his sales and exposure in the south east.

“Our goal is to just get more cooking in people’s mouths and for us to do that it just takes capitol,” Armstrong said. “I want everybody in the south east to know about G Mommas. Instead of growing wide, I need to grow deep in the store. I need to sell more in the stores that I’m in. That’s the goal and the focus of this competition.”

After receiving feedback from the judges, Armstrong will have to turn in an advised business plan and then participate in the final pitch on April 27 in Mobile.

“It’s a critical point in my business. I would not only be really excited [to win the money] but also excited about where I could take the business,” Armstrong said. “In this type of business, there’s not enough money to do everything you want to do and there’s no such thing as having too much. The more you have, the farther you can go and the better it is to get into new stores and get the product moving in stores.”

Armstrong said his strategies for the future are to have more in store demos, grow digital brand marketing, have food shows and increase product development.

“I wouldn’t be surprised if we could double the business with the money,” Armstrong said.

Armstrong said the Launchpad will hold a crowd favorite vote in the coming days. To keep up with the latest information, visit alabamalaunchpad.com.