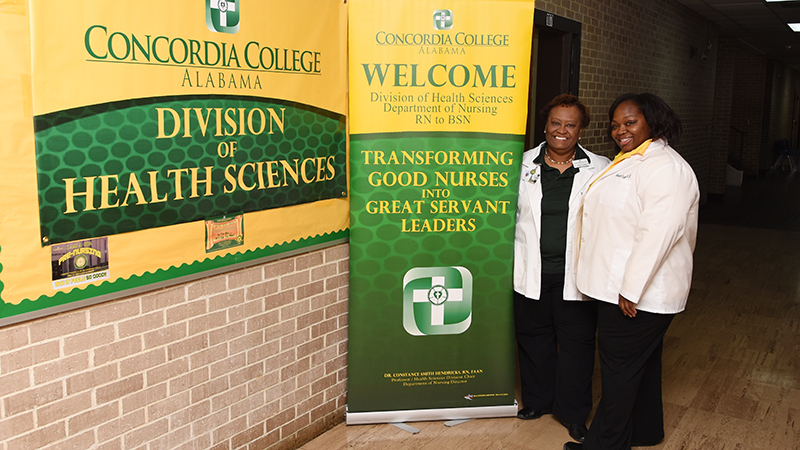 Two years of hard work has paid off for Dr. Constance Smith Hendricks and the Concordia College Alabama nursing program.

The school received a six-year accreditation last week from the Commission for Nursing Education Accreditation. The accreditation status began Feb. 17 and will last until Feb. 28, 2023.

The program is for students who already have a license and an associate’s degree.

Hendricks is the Health Sciences Division Chair at Concordia and the Department of Nursing Director. She’s been at Concordia for two years and her main goal has been to get the nursing program started.

When she saw a new email from the commission last week, she hooked her computer up to a projector so the entire class could see it too.

“We opened it up so everybody saw it at the same time,” Hendricks said. “It was the big reveal. Everybody read it together, so we were cutting up together down in that classroom.”

Concordia currently has four nursing students and all four have associate’s degrees from Wallace Community College Selma. Hendricks said she had 14 students sign up initially, but the majority of that group got cold feet.

She’s proud of the four who stuck it out and who will graduate this spring with bachelor’s degrees in registered nursing.

“I said, OK, it’s the first class, but why not be part of the first?” said Jeanette Caddell, the youngest of the four students in the current class. She graduated from Wallace last year. “I was just like, I’ll take that risk to get where I need to be.”

Classes meet once a week on Fridays for 12 months. The six core competencies for the degree are communication and collaboration skills, critical thinking and clinical judgement, scholarship for evidenced based practice, clinical prevention and population health skills, diversity skills and leadership skills.

As Hendricks puts it, the program is for good nurses that want to become great.

“We don’t have the resources that Wallace has with the labs and the mannequins and all that stuff.  We don’t do that. They have to know that when they get here, so that’s why we say we transform good nurses into great servant leaders,” Hendricks said. “They already have to be a great nurse. I’m not trying to make them a good nurse. I want a good nurse to come.”

Caddell said she’s built on her education at Concordia and better understands why things are done now.

“Here its more about applying what I learned to the theory part of why I do what I do,” Caddell said. “In the theory class, they taught us about why we are checking the blood pressure, why we’re getting them up and moving them around and all this kind of stuff. It kind of bridges them together, the theory to the skills portion.”

“What they are learning different is to take that bedside knowledge they learned at Wallace and I add to it leadership skills, research and what is now called evidence based practice,” Hendricks said. “They learn how to apply that in non-hospital settings, like public health.”

The class took a trip to Servants in Faith and Technology in Lineville. SIFAT put the students through training, where they could learn how people in other countries live. The students are also taking a trip to the United Nations on March 13.

Hendricks is hoping to have around 20 students in her next nursing class. She is encouraging anyone with an associate’s degree, especially those currently in junior college, to consider getting their bachelor’s degree.

“The research says the more educated your nurse, the better the care, so that’s why you need to come back and get your bachelor’s degree,” Hendricks said.