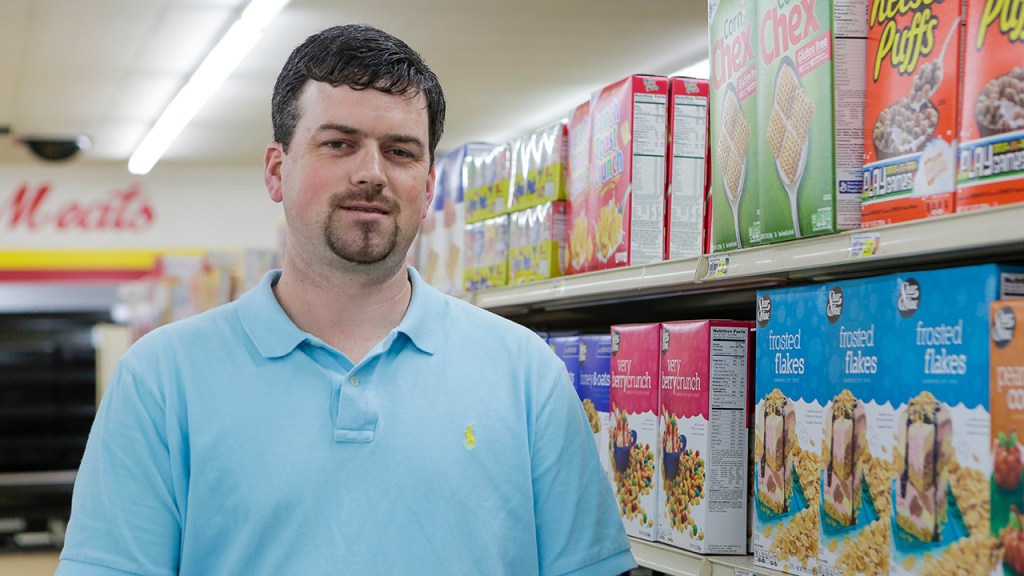 Joseph Fuller, owner of Food Outlet, poses for a photo inside the store. He hopes the outlet will open for business in the next two weeks. --Alaina Denean Deshazo

After months of planning and renovations, a new grocery store will be opening in the old Calhoun Foods location.

Joseph Fuller, owner of Food Outlet, said the company purchased the building with the intentions of renovating and opening with its cost-plus format.

“I wish I was open yesterday,” Fuller said with a laugh. “I can’t stress how excited I’ll be when we open that door and let people in here.”

Fuller said a lot of work still has to be completed before the opening, but he hopes to open the door and invite people in within two weeks.

“We’ve got to work day and night to get there … but it’s starting to come together,” Fuller said.

“It’s going to be a lot different look and environment on opening day.”

Since Food Outlet purchased the building, they have replaced the roof, painted on the outside, restriped the parking lot, purchased new equipment for all parts of the store, put in new floor tile and more.

“Just the feedback we’re getting from the community, people are really, really excited,” Fuller said. “They may be about as excited as I am.”

Fuller said the company chose Selma because it felt like it could benefit from the cost-plus format, and living less than an hour away his whole life, he felt drawn to the community. He said being able to hire people from Selma is also a positive for the city.

“I know this is one of the highest unemployment rates in Alabama,” Fuller said. “That’s one of the good things about being in the store business and opening up a new business is you’re able to give back to the community. We’ve hired about 20 to 30 [people] and we’re going to hire up to 50.”

Sheryl Smedley, executive director of the Selma and Dallas County Chamber of Commerce, said she is looking forward to the opening of Food Outlet and the benefits that it will bring to Selma.

“I know it’s a huge investment into our community,” Smedley said. “We’re very thankful because it’s going to make a difference in our community and boost our economy and redevelopment.”

Fuller said another way the store is giving back is by buying local.

Fuller said the store is very particular about the meats it sells, making sure it’s always fresh and cut in store.

“We’re going to have fresh cuts from one end of the case to the other. Nothing will be pre-packed, everything will be cut on site,” he said.

“We do an old traditional way of everything is fresh cut or we don’t sell it.”

Fuller said anyone interested in working at Food Outlet can go by the store, located at 415 J.L. Chestnut Blvd. from 8 a.m. until 5 p.m. to drop off applications.

“We’re not going to be the only ones to benefit from this store,” Fuller said. “I think the city of Selma is going to benefit more than we will. Just the convenience of it and the product that we’re going to offer and the quality of meat will be second to none.”