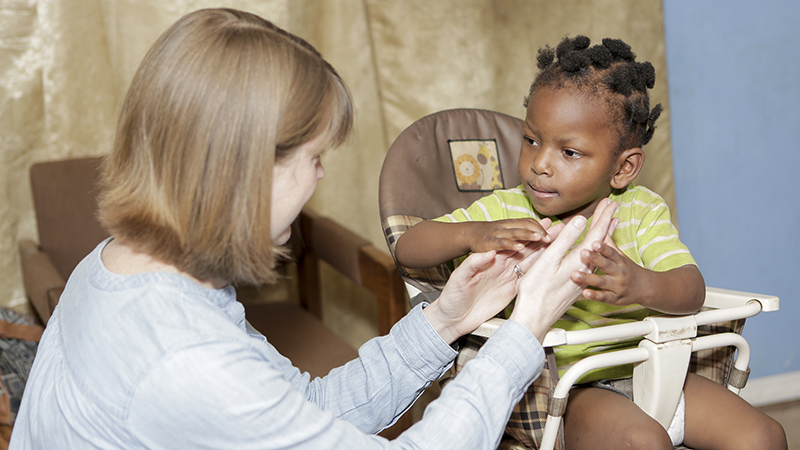 Around a year ago, then 1-year-old Ace Ray was a withdrawn baby. His mom, Amanda Ray, said he didn’t really like to interact with her or anyone else, and he would tend to stay off to the side and not try to participate in anything.

But all of that is changing with help from the Cahaba Early Intervention program.

“In the beginning, he was very withdrawn. He would stay in corners a lot by himself, and he wasn’t interacting and playing with toys,” Ray said. “Since he’s gotten into the Early Intervention program, he’s a lot more vocal, he’s actually trying to talk.”

Ray said he isn’t quite talking yet, but he’s really come out of his shell.

“He’s not talking, but he’s trying,” Ray said. “Play time is a lot more fun for us because he attempts to get me to watch him or he tries to get my attention now which is huge because normally he would just sit off in a corner all day by himself.”

Ace was recently diagnosed with autism, a common diagnosis among babies in the early intervention program.

“It’s a blessing because before they came a long, I just didn’t know how to work with him on an everyday basis,” Ray said. “It was like having a child that I’m just guessing all day long what he wants.”

Carrie Bearden, director of the program at Cahaba, said it’s a great feeling to see the progress of the babies from when they first start working with them.

“We work with babies from birth to 3 years old who have developmental delays or a diagnosis that may cause a developmental delay,” Bearden said. “Some babies, especially those born prematurely, we get them as soon as they get out of the hospital and start working with them and their families.”

Ray said she is thankful to the program and how much help they have provided Ace.

“At the beginning, he wasn’t even interested in them being here, and he was really withdrawn,” Ray said. “Now he’s able to play with us and interact with us and he’s becoming more vocal as well.” 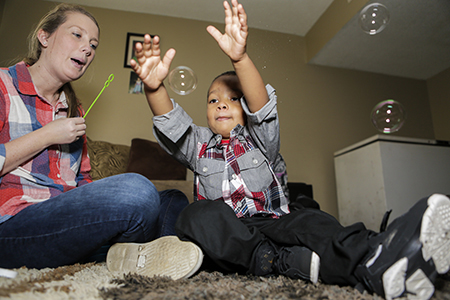 Meredith Reaves blows bubbles to Ace Ray to get him to interact with her during a session.

Ray said the help is invaluable and is she is glad there are people out there willing to help.

“It’s comforting to know that there’s people that care enough to come out and take time out of their day to work with him,” Ray said. “He’s shown so much more improvement since he’s been in the program. He’s like a whole other child.”

Meredith Reaves, a speech language pathologist with the program, has worked with Ace and with Keterrion Edwards, among many more babies in the program.

“There’s so many children that have speech needs and parents just need help and tips to get it started to keep them from needing help in the school system,” Reaves said. “Us being able to do it early, sometimes prevents them from needing it when they get to kindergarten. The earlier we can start with them, the better we can prevent things down the road.”

In Edwards’ case, they haven’t yet determined what his diagnoses is, but the Early Intervention program has already been in the home working with him. He isn’t quite ready to walk on his own, and he isn’t able to speak yet, but Reaves and Bearden said he is really coming along and doing well in the program.

“It feels awesome that I have been able to impact a family, a child’s life and be able to give the parent the tools to be confident in teaching their children as well,” Reaves said.

“A lot of times, our babies in the beginning just need help interacting, participating and being able to just play.”

Georgia Bailey, Edwards’ grandmother by marriage and his legal guardian, said having them there has been a lot of help in moving Edwards along.

“The service they have offered me so far has helped me out a whole lot and have me experiencing how to take care of him and his needs,” Bailey said. “He wasn’t walking at first until Mrs. Carrie and them got involved. It has helped out a whole lot and it has me feeling more confident in myself and knowing that I’m helping a lot too.”

The program is no cost for the families, providing them with necessary tools to help children with their development that they may otherwise not be able to offer.

“I’m very thankful because at the time, I didn’t know how I was going to get the help to try to help him improve, until they were telling me about Early Intervention,” Bailey said.

Reaves is just one part of the program that helps the babies out.

Each child is offered a physical therapist, occupational therapist and speech therapist to help their development. Bearden said the program serves about 40 babies right now in Dallas and Wilcox counties and all visits are in home.

“We provide all the services in their natural environment, so where ever they are is where we go. It makes them more comfortable,” Bearden said. “It’s a very family driven program.”

Bearden said for services outside of what they can offer, they can link families to doctors and specialists that can better help the babies.

Parents can call the Cahaba Center for Mental Health at 875-2100 to learn more about the program or to see about enrolling their baby.

Reaves said she enjoys being able to work with the babies, and helping them to make progress.

“I just feel like this is my way of giving back and helping teach those that are willing to learn,” Reaves said. “This is our future and teaching these babies to communicate, what better is there to be able to do?”