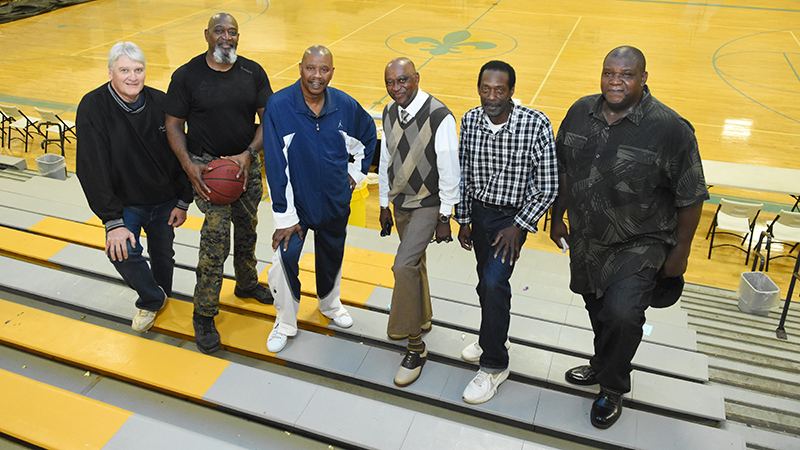 He tells his players to line up on the baseline to run basketball suicides, the exercise players hate most. Then, he sets the clock and shouts “let’s go.”

The familiar sound of sneakers and squeaking on the hard wood fills the room. As they run, Robinson times the drill. Finish in 30 seconds and they’re done, but take longer and there’s at least one more suicide to run.

The players don’t realize that Robinson was once a star at Selma High, and his teammates on the 1977 Selma team — one of the best teams in school history — used to run a lot more than that during the summer.

“These kids over here are [into their] iPhone, headphones, walking around being cool, but they never get in here and work on their skills,” Randolph said after the gym clears. “One thing coach [James] Booth taught us and he hit the nail on the head. He said every team starts practicing in October. They start at the same time. Where you get better at is during the summer.”

Booth, who coached at Selma during the 1970s, made sure his players were in shape. During the summer months, the Saints ran from the school’s gymnasium to Memorial Stadium, raced the equivalent of a mile around the track and then spent 30 minutes going up and down the bleachers.

“I think that was the worst summer of our life because we only had one week off the entire summer and that was the week of the Fourth of July,” said Anthony Moore, a key contributor on the ’77 squad.

The 1976 Selma team had made a deep run in the postseason, but fell to Bradshaw in the state tournament. Moore said Booth and fellow coaches A.A. Sewell and Elton Reece used that deep run as motivation to make sure Selma finished the job in 1977.

“For us to go back the next year and win it was pretty cool,” said Todd Smyly, who played point guard back then.

The newspapers that tell the story of Selma’s fairy-tale like journey in 1977 have begun to show their age. The once white pages are now turning yellowish brown, but the details and photos inside are irreplaceable and one of a kind.

“Cinderella Selma wins 4A Crown” reads the headline on the front of March 13, 1977, Montgomery Advertiser-Journal. The headline in The Selma Times-Journal that day was “Ugly Duckling Saints Claim 4-A Cage Crown.” 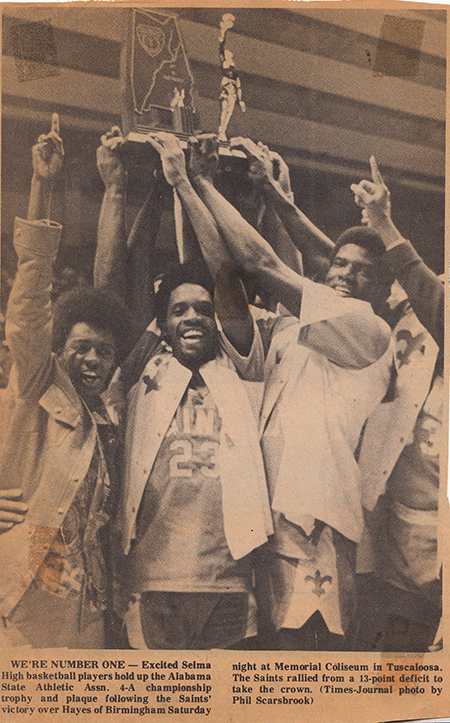 Selma had trailed Hayes 34-21 in the second quarter, but rallied to steal the title in the final seconds. For the second time in three days, Robinson hit a late jump shot to put Selma on top. Hayes called a timeout on the next possession, but was called for a technical foul because the Pacesetters didn’t have any more timeouts to use. The Saints put the game away with free throws and won 63-57. It was the school’s first basketball championship under the name Selma High School, and it came in 4A, the state’s highest level of competition of the time.  Parrish High School had won titles in 1945 and 1946.

“The first thing that comes to mind is the song by Queen, ‘We are the Champions,’” said Anthony Jordan, a forward on Selma’s championship team from that year.  “They played that and the team we beat — It was like ‘wow.’”

Smyly and Michael Courtland made the free throws in the final seconds to put the game on ice.

“We were sufficient, but we weren’t overly talented,” said Ken Clark, a senior on that Selma team. “In the state championship, we beat a team from Tuscaloosa and then we wiped out three Birmingham teams, and we weren’t supposed to do that.”

Selma beat Druid, Homewood and Jackson-Olin just to get to play Hayes for the title, and all of the games were decided by single digits.

Clark said Robinson’s game winner against Homewood in the semifinals — a 12 to 14 footer — gave the team the momentum it needed to win the championship.

“I was a good shooter and I led the team in scoring but you couldn’t just key on one person,” Robinson said. “You try to cut Lo off, Ben off, Mike off, me off and then Todd then [someone else] would score 18, 19 points. We were short but we had shooters. We could shoot that basketball.”

Twelve years after the height of the voting rights movement in Selma, the 1977 Selma team came together as a mix of players with different backgrounds to make history.

“They accepted me real well, and those guys were really good to me because they could’ve shunned me,” Clark said. “We were kids and we don’t get into all that political stuff and I still don’t. I treat people no matter the color of their skin, I treated them the same and they did me too.”

Robinson said Booth encouraged his players to do everything together, and it created a closeness within the group. Clark was the tallest player on the team, but he had trouble adjusting from the private school game to the public school side.

Moore said Clark learned to adjust after hanging out with the rest of the team.

“When he came in, Ken Clark couldn’t dunk, but when he left he was slamming, blocking shots and everything. Coach Booth used to make me take him to the hole and lay the ball up. I used to lay the ball up under his arm. He started hanging out, we started going to different playgrounds and going to the hood with us, and it really toughened him up,” Moore said.

Robinson said that’s part of the reason that Selma team was different. They hung out together outside of school and on weekends.

Moore said the community really embraced that team as it made its run to Tuscaloosa.

“They loved it. They packed the gym, white, black. You had the whole city and the whole county behind us. Everybody,” Moore said. “Mayor Smitherman didn’t go to games, but he came to see us play.”
TEAM ORIENTED

Robinson was the hero during the team’s title run, but the team’s other seniors — such as Ben Carter and Lorenzo Courtland — played big roles as well. As the point guard, Smyly was considered the leader on the team.

Robinson got the headline in the Times-Journal for his game winner against Homewood, but Smyly scored 28 points in that game to lead all scorers.

Lorenzo Courtland had 10 points and Carter had 9.

In the championship game versus Hayes, Carter scored three times in the last 90 seconds of the first half to help Selma cut the Hayes lead from 13 to 34-29.

“In fact, had it not been for the hot hand of Carter, the Saints would have been out of the contest by intermission,” wrote Sam Ezell, the Times-Journal’s sports writer at the time.

From the biggest star to the last guy off the bench, the title was truly a team effort. From Robinson to Ken Clark, Greg Hill and Robert Phillips — everybody played a role.

“We spent a lot of time together because in Selma in those days you chose your sport,” Smyly said. “You weren’t going to play two or three sports.”

The team’s depth also was a key strength. 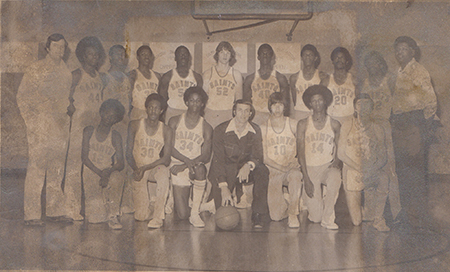 The 1977 Selma High state championship team poses for a photo

“Our second five could come in and play with anybody else’s first five,” Moore said. “When we changed out, we weren’t missing nothing.”

The one disadvantage Selma had against all of the top teams it played was its lack of height. Selma had to overcome that by playing hard, digging in on defense and relying on everyone to go at the basket for rebounds.

“Fact is, most unbiased observers figured Selma should’ve never been in the select field of the top 12 4-A teams in the state. Really, in this day of offensive basketball, how did you expect a team of 6-1 forwards to survive,” Ezell wrote.

The Saints didn’t just survive though, they overcame the odds.  Clark, the team’s tallest player, was more of an offensive threat than a defensive one.

“I was one of the future 6-foot-6 point guards but I just didn’t know it then,” Clark said with a laugh.

“I wanted to shoot and score. I didn’t want to play defense.”

As it turns out, Selma was just fine, thanks to its hard-nosed-style of play. Selma finished the year 29-4 and won its last 10 games to take the title.

“We were real disciplined, and we had a very good coach in coach Booth,” Jordan said “We all just clicked.”

Robinson and Moore said that after the state championship, Selma was poised to play in a national tournament in Chicago, but didn’t end up going.

“We didn’t have the funds to go, so the city set aside the funds and gave us all plaques,” Moore said.

Whether it was a paper recognizing the achievement or a plaque depends on which player you ask, but the team didn’t receive rings.

“I guess they couldn’t afford them back then. They gave us pieces of paper. We didn’t get any rings,” Jordan said.

Although the players would still love rings, the school has taken time to recognize the team in other ways.  In December, Selma High brought in both the 1994 and 1977 championship teams at one of the school’s first home basketball games of the year.

Each team’s championship trophy was brought out and players in attendance posed for a photo together and got recognized in front of the crowd.

Moore actually has considered the idea of hosting a charity game between the 1994 team and 1977 team at Selma High School.

“Matter of fact, we made a challenge to them. We wanted to play a charity game.”

Randolph agrees — the 1977 team would win, even after all these years.

“We would beat them today,” he said with a smile.

Others aren’t so sure.

“I heard that I said ‘Has Randolph lost his mind?” Jordan said with a laugh. “We must be going to play half court or something.”

As expected in 40 years, the team has gone its separate ways.

Smyly went on to play at Jacksonville State University and then coached for several years. He now lives in Arkansas and the closest he usually gets to athletics is through his son, Drew Smyly, who pitches for the Seattle Mariners in Major League Baseball.

Others have remained close to home, including Moore, Jordan, Clark and Robinson. Several members on the team, including Robinson, went on to play at Wallace Community College Selma with Booth, who accepted the Wallace job after leading Selma to the title.

“I had other offers but I was in love with my wife Debra Robinson and I didn’t want to leave,” Robinson said.

“I’ll tell you this — I’m glad I didn’t because I had a chance to raise my son, coach him a little while and watch him come up.”

Booth, assistant coach Elton Reece and Michael Courtland have each since passed away, but their legacies in Selma are well intact.

The Internet didn’t exist back then, so the only evidence of the team’s championship season is left on old newspaper pages and in the memories of those who were a part of the team’s Cinderella run to the top.

With the passing of time, it’s become even more clear how special of an accomplishment that state championship was.